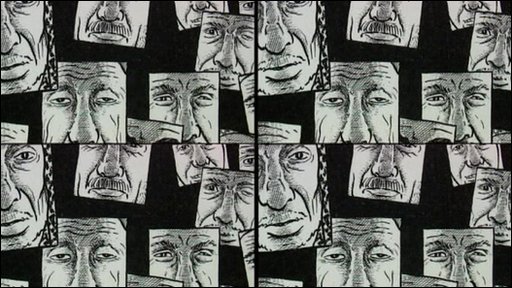 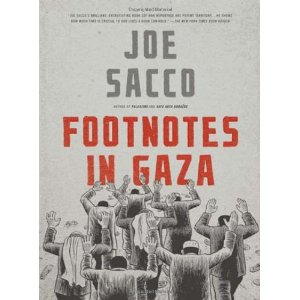 The downside of attempting to read timely political comics in order to write timely reviews is that you’re often pushing yourself to digest a lot of heavy material in a short period of time. I’ll be honest; it’s really difficult to be going back and forth from Gaza in my newsfeed to Footnotes in Gaza–which largely focuses on events from half a century ago. The idea that this reality is not only constant in that part of the world, but has more or less continued this way for five decades, is mind-boggling.

The first time I read Palestine was back in 2003, and I spent a good 2 months wading through the pages, studying the history and references, appreciating the attention to detail in the art (I had time to admire Joe’s artistic rendition of fabric the most–all of the middle-eastern apparel, I thought, from kufiyehs to shawls, seemed destined to be drawn).

This time around, after going through Palestine again, in addition to Sacco’s relatively new release, Footnotes in Gaza, I feel like I’ve been punched in the gut. Obviously, this isn’t the best thing you want to read in a review… I assure you, there’s a lesson to take in from this. Maybe it’s the combination of the books the real-time video I’m seeing of Gaza on Aljazeera and Russia Today. Maybe it’s the incinerating atmosphere on social media, where people dangle baited commentary like matches over their hot-headed opponents.

I’ll keep what I have to say relatively short. Frankly, this post is more about showing folks looking for political titles that there are comic resources out there for those looking for more information on Israel and Palestine –and as a veteran comics journalist, Joe Sacco is an excellent place to start. From there, I’d just assume that you’d rather spend your time reading those titles than reviews of them, right?

I will say this, with a special focus on those of you reading this who think  a “comic interpretation” of Israel and Palestine is tantamount to insulting… quite the contrary. The irony is that Joe does not cynically summarize the arguments of those on the front lines of this conflict, as anyone with more than a mild opinion on the matter is guilty of doing at least once. In the times when the conflict heats up, our detailed portraits whittle away just when readers and viewers need them the most in our media… the Israeli who hates his government but can’t reconcile the ingrained notion that Jews constantly face an impending doom… the Palestinian who, in the words of author Norman Finklestein, must face the challenge of being both “principled and reasonable”, when that is essentially an impossible thing to do. More than anywhere else in the world, and with any other conflict, complexity here dissolves into a simplified belligerence. Israelis become crusaders for the ideals of the western world, or madmen screaming about terrorists. Palestinians become the front-line fighters in a global struggle against the forces of imperialism–or madmen screaming about Zionist snakes.

Of course, I have my opinions… but the irony is that Joe Sacco, a professional cartoonist, does not indulge our cynicism with these caricatures. In fact, as a comic journalist (a profession whose total validity gets challenged on the regular for him 2 decades into his work), he is perhaps more diligent than any other dispatcher in Palestine to portray an unedited picture. You won’t find anything like it in the political cartoons of your newspaper’s opinion section… nor on CNN or BBC, or Aljazeera.

As I finish writing this, the Telegraph reports that Israeli Deputy Defense Minister, Matan Vilnai, has vowed a Palestinian “Holocaust” as a result of the rockets fired by Hamas in Gaza. Yea, he just went there. I imagine that Joe Sacco began this project of documenting the lives of Palestinians because he felt we weren’t getting their story in the West. My response to that now, in 2012, is that we easily hear more about the situation of the Palestinians… and yet it doesn’t matter. Israel acts like a monster that no longer cares to hide it (see, I just KNEW I couldn’t get through this review without making a generalization), and the West supports them while pretending that their hands are tied.

Lastly, I come back to my own mental state right now, after reading these volumes. My lesson is, naturally, to not do what I just did. Take time to digest what you’re reading and looking at… and come to your conclusions in time. No cause is properly furthered by uneducated followers. The last thing the conflict needs are more caricatures.

2 thoughts on “Joe Sacco’s Palestine and Footnotes in Gaza”