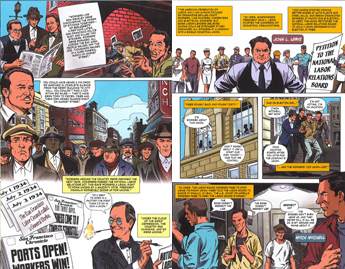 Having been a member of the IBEW for a short while back in Vancouver, I find this to be very interesting… Take a look! Though comics might be known for their spandex and capes, they have a long tradition of being used for political and educational purposes though. The International Brotherhood of Electrical Workers (IBEW) has turned to comics to tell the story of the hero of the “union men and women who made the American middle class.”

Local union chapter Local 1245 in Vacaville, California earlier this year published First Day. It’s a 20-page comic that goes over the history of Local 1245 and the labor movement. It’s given to all new members in their orientation packets and so far the reaction has been positive.

The comic was created by the communications director of the local union Eric Wolfe and artist Tom Christopher.

“First Day” tells the story of a new employee at California utility PG&E. The worker tells his son about the IBEW and all the good benefits…