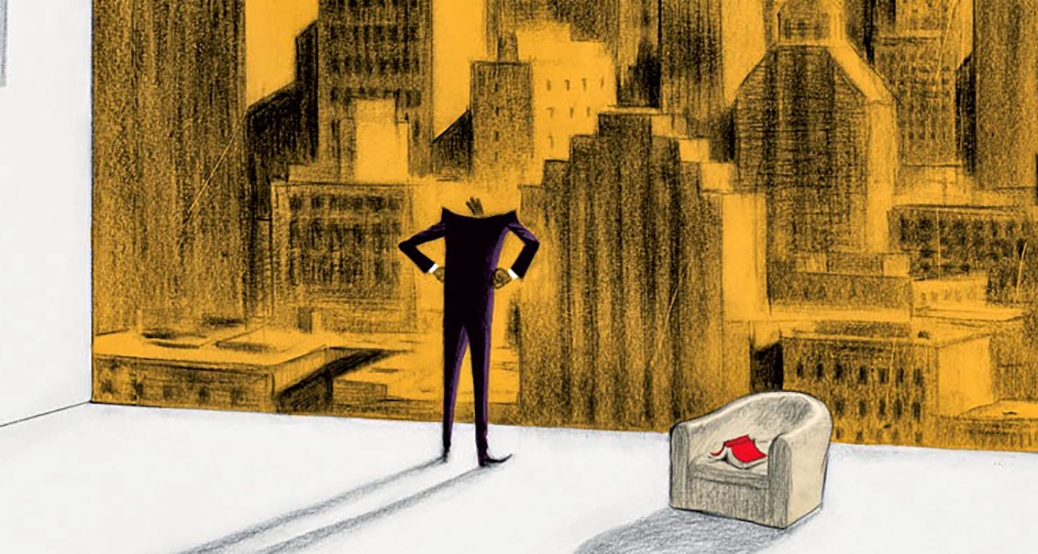 There is something about the emphatic way Alexandre Taillard de Vorms speaks that makes the reader almost forget he is talking nonsense. Although he isn’t the protagonist of “Weapons of Mass Diplomacy”, there is no question that he’s the star. This fictionalized version of French foreign minister Dominique de Villepin is presented as an orgy of contradictions. Everyone around him thinks he is incoherent, but insists he is a genius. His ministerial staff relentlessly mock and undermine each other even as he is presented as an effective statesman. Most of all, he stands like a colossus of morality over the geopolitical landscape even as the reader is aware the man is a dangerously self-involved opportunist whose only care outside himself is France’s strategic interests. Physically and by dint of sheer presence, this tower of inconsistency looms over Arthur Vlaminck, the lowly speech­writer and nominal main character.

Aesthetically, the comic is enchanting. For a story about civil servants it flows with marvelous action – dropping, running, drinking and above all gesticulating wildly. The reader may be forgiven for feeling it owes something to the aesthetic of Tintin. The author devotes a page and a half of de Vorms’ dialogue to praising Tintin as flowing, beautiful poetry. The homage is both explicit in the text and implicit in the style, making action out of a torpid subject. Above the narrative looms de Vorms, large as the rocket ship that took Tintin to the moon.

It is easy, as the protagonist does, to allow this looming character to take you in. It is very plausible he is on some kind of just – if slightly absurd – crusade against a world of bureaucrats and hypocrites. But here is the danger of a story like this one, told from on high to those below. The idea of history as a tale of great men and their daring deeds has been tossed into the requisite dustbin. New movements of history from below have opened up space for voices of women, workers, people of colour and others traditionally left out of historical narratives. The beauty in this is that it allows us to reinterpret those great, white men from the perspective of those they exploited.

In some respects, “Weapons of Mass Diplomacy” suffers from the ‘Great Man’ view of history. There are a handful of female characters in this male­-dominated narrative. First is the minister’s secretary, and though it is a literary convention to depict secretaries as weirdly all­-powerful, this one is built to be chastised by her boss. The protagonist’s girlfriend is the second of three notable female characters, but though she is evidently educated, she seemingly exists only to admire her partner then suffer disappointment and neglect. Finally, there is one staffer to the minister, but she is heavily sexualized, a scheming Jezebel. At no point do these women interact. Other women make brief appearances but it is a comic dominated by men.

So too one might rightly observe that they are all white men, at least apparently. While France, the United States and Germany are all featured as relevant global players, countries in Africa and the Middle East are fictionalized. Several African countries are given phony names, as is Khemed, a stand­-in for Iraq. In one of these fake African countries, a horde of mostly faceless black bodies are shown menacing French citizens. Valerie Dumontheil, the ministerial staffer responsible for Africa, is white. So too is Stephane Cahut, whose file is the Middle East. It is a story about white people making decisions that will affect the whole world. The sole person of colour with much agency is a thinly veiled Colin Powell, point­-man for American imperialism. One suspects his token presence in the comic reflects the tokenization he experienced in office.

What makes “Weapons of Mass Diplomacy” worthwhile, then? On page after page, silk ties and designer suits flow before our eyes. First class flights, ornate corridors of international power and expensive dinners greet a reader who might well presume they are meant to be enchanted by it all. But satire, it must be said, is a subtle science. Reading closer, it becomes apparent that there is an empty pomposity to those dazzling halls of power. The first-­class destinations are interchangeable sets for self­-indulgent babble. The decadent dinners taste of hypocrisy and self-absorption. Most of all, designer suits notwithstanding, the emperor is quite naked.

All of which is fine from a literary perspective. They might still have made space for voices of irony or dissent, representing the oppressed. This is a fine thing, an admirable practice in modern narrative where it occurs. But the sad truth is that real life, like the comic, is often a story about white people making decisions that will affect many lives beyond their own. Including oppressed characters is an important ongoing project, but perspective is versatile. By taking the view of the rich and powerful and showing their arrogance, cynicism and isolation from consequences, the comic mocks their pretensions.

Without ever presenting a real voice of critique, the comic is the critique. Taillard de Vorms is an absurd figure, a bombastic bureaucrat with delusions of heroism. The sycophantic civil servants surrounding him are desperate courtiers, vying for the favour of one of the king’s men. The grandeur of their offices at Quai D’Orsay is the faded pomp of a decaying empire, struggling to maintain itself in a changing world. If the perspective is a privileged one, the narrative quietly exposes the destructive narcissism of the powerful. Pulling the thread of official narrative until it unravels, the ugly nakedness of 21st century imperialism is exposed for all to see. If stories are to be told from a privileged perspective, there is no better view than that.

One thought on “The Emperor Has No Clothes: A Review of “Weapons of Mass Diplomacy” by Lanzac & Blain”