This is not the review I want to be writing about Joyce Brabner’s ‘Second Avenue Caper’. I’d like to discuss it on its own terms. Reading it, the Dallas Buyers’ Club was the first thing that came to mind and I thought how incredibly obvious that was. How it didn’t really need to be mentioned, particularly when people have done such a good job of critiquing the obvious flaws of that film.

Unfortunately, there is a striking parallel between ‘Second Avenue Caper’ and Dallas Buyers Club that needs to be discussed, because it’s typical of a trend in moving Hollywood dramas about moments of historical importance. It’s not just a question of who gets to be the hero and who gets to be the sidekick. It’s a problem with what gets put into these stories – moving, human drama – and what gets left out.

“Second Avenue Caper” is the work of Joyce Brabner, distinguished comics author, dedicated activist and frequent subject of the comic ‘American Splendor‘ by her late husband, Harvey Pekar.  The comic is told as an interview with her friend, Ray. It is illustrated by Mark Zingarelli, an experienced artist who contributed to R. Crumb’s ‘Weirdo’ and to American Splendor. The comic uses the interview as a framing device to narrate the story of Ray’s experience of the early days of the AIDS crisis as well as the larger historical context. It is centred around his work as a member of a group that was responsible for smuggling experimental drugs into the US for AIDS patients. That is the obvious similarity with the ‘Dallas Buyers Club’  (For those of you who are unfamiliar with the Dallas Buyer’s Club, here is a trailer:)

There is some obviously wack shit about this film that people haven’t been shy about calling out. Namely, it’s all about a straight white dude in a story about a crisis that overwhelmingly affected queer people and people of colour. It makes that white dude the hero of the story and hands him a plate of cookies for overcoming *some* of his bigotry. The film cast a cis man, Jared Leto, to play a trans woman. Leto’s performance was criticized as wooden and unbelievable and the character was criticized as being a stereotype.  All of this is pretty well putrid, but it’s also well trod ground.

Both are “based on a true story,” but Dallas Buyers’ Club is an outlier. The story of most people in the early days of the AIDS crisis is a story of queer people and people who used needle drugs. ‘Second Avenue Caper’ gives us an ensemble cast: it’s narrated by a gay male nurse, but his circle of friends stretches to include other gay men, lesbians, trans people, and people of colour. One character lacks status in the United States and is in danger of being deported even as he dies of AIDS. Instead, he ends up being driven across America in an RV being used to smuggle pharmaceutical drugs over the border. The narrator’s mother makes an appearance, doing her best to understand her son’s “lifestyle” and in the end criticizing her church for their un-Christian behaviour. 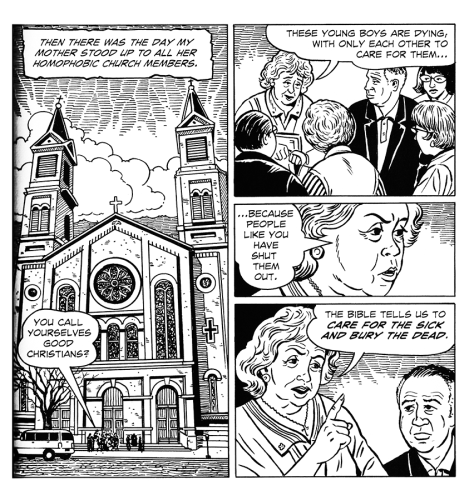 These characters enjoy more or less development – the narrator gets the most panel time, by necessity. But they speak, eloquently, about their experiences of a system that ignores them, at best. Some talk politics while others simply live them. There are artists and activists, rich gay men and a closeted pizzeria worker from a Mafia family. It’s an incredible story. And that’s great. So is Dallas Buyers Club when you get down to it. But while both have tender moments, heartbreak and human drama, only one acknowledges the political realities of the crisis.

‘Second Avenue Caper’ calls Reagan out for refusing to even speak the fucking name of the disease. It features the revolutionary work of the direct action group ACT UP and the success of its confrontational tactics. (In general, ACT UP doesn’t get enough love. Check out this Oral History Project to learn more.) The comic goes out of its way to present an ensemble cast and include the contribution of lesbians in fighting in a struggle unlikely to affect their own bodies– a contribution that too often goes unacknowledged. And the comic is frank about how families abandoned their queer kids and hospitals turned patients away, isolating victims of AIDS when they were at their most vulnerable. It comes up more than once that the government and the public can’t quite be persuaded to give a fuck about what was seen as a gay disease and how that helped to spread the epidemic. Although it is a moving, human work with beautiful moments, it is also deeply personal.

By contrast, Dallas Buyers Club is a free market fairy-tale. It is about a literal cowboy, a hard drinking, chain-smoking serial womanizer who wears his ignorance as a badge of honor. He is shown as defying arrogant government agencies who seem determined to block the entry of untested AIDS drugs into the US, mostly out of bureaucratic spite. The protagonist’s gradual, begrudging willingness to treat his oppressed clients like human beings is profoundly fucked. It’s not an improvement for bigots to slowly learn how to respect individual members of oppressed groups. That’s how the overwhelming majority of them already are. They are quite capable of making exceptions and recognizing the humanity of individual members of oppressed groups. There is nothing heroic about his tolerance.

So here’s the larger point: Yes, representation matters. But even if a gay man or a trans woman had been the protagonist of Dallas Buyers Club it still would have been a libertarian’s fantasy. It still would have failed to acknowledge the deep, structural discrimination which worsened the AIDS crisis, put public health at risk and isolated tens of thousands of vulnerable people. It would also have failed to show the ways that people not only fought to survive, but fought back against the racist, homophobic reality of Reagan’s America. ‘Second Avenue Caper’ manages to do all those things while being every bit as funny, engaging and relatable as any Hollywood Blockbuster.