It probably doesn’t need saying that I love comics. I would not have committed myself to a life of reading, writing, researching and reviewing comics if they were not very dear to me, masochistic tendencies aside. But while I adore them, political comics put me in a jam so thick I consider spreading it on my mid-morning toast. Maybe my partner’s thinking has infected me; when she started Ad Astra Comix close to two years ago as a review site, she said it was in part because the quality of political comics was generally so low.

So I approach these reviews with a critical mindset, looking for a holy grail or at least a holy fail that will make appropriate review fodder. ‘On The Books’, appropriately enough, falls between these two categories. It is not going to knock Maus or Persepolis off their thrones but it is a good comic in a very specific way; something I haven’t often come across.

‘On The Books’ is a semi-autobiographical comic by Greg Farrell, describing the experience of the author as a member of the United Auto Workers local at The Strand Book Store in New York City. If a unionized book store strikes the reader as a curiosity then they will not be surprised to read that the comic is something of a curiosity as well.

It is, among other things, an oral history put to paper. Through a mixture of interviews and narrated recollection, Farrell recounts a narrative of workplace struggle replete with lessons, quips and uncomfortable truths. If the comic can’t claim to set an industry standard for art or narrative, it comes close to providing a blueprint for recounting political struggles in its expertly arranged assortment of narrative elements.

Perhaps in order to anonymize his co-workers, or simply for eccentricity’s sake, Farrell has rendered them in a delightful diversity of caricatures: Werewolves, wizards, enormous babies and wizened birds all stand in for Strand employees as they describe their thoughts, feelings and experiences around their work. Often they look as though the worker said, “I think it would be cool if you drew me as a yeti.” But sometimes, it feels like the avatar chosen to represent an employee may be meant to amplify the message. In any case, they make it more visually interesting to read through a comic with potentially dry subject matter.

Visual interest is important for ‘On The Books’ which does not fall neatly into the genres of political comics I am most familiar with. It reminds me most of thoughtful activist report-backs I have sometimes read. Although he is careful to provide morsels of context where they are most needed, Farrell’s comic is about a labour struggle. Although it can look very heroic when the cops open fire on a picket line of grannies, I remember from my undergrad days how boring endless discussions of percentage increases and safety minutiae can seem to the outsider. 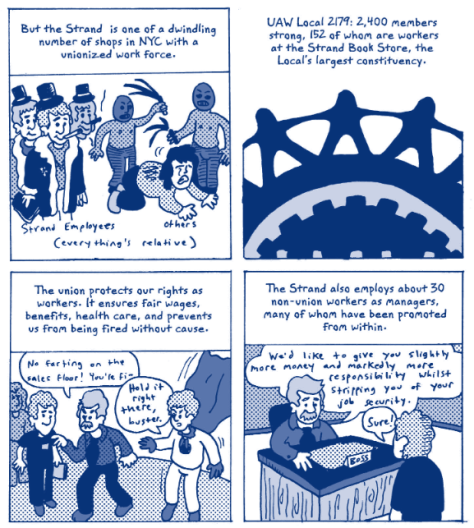 This is where ‘On The Books’ transcends amusement to be a genuinely enlightening comic. Report-backs from the ground are always very valuable and provide an intimate understanding of how to conduct campaigns. I find myself reading descriptions of activist struggles that do nothing more than overlay the politics of the author onto the barest bones of fact. Through a combination of context, interviews from people involved in the strike and a narrative of the strike’s events, Farrell transcends this kind of vapid ideological graffiti to produce what seems to me like an honest account of events. He discusses the problem of receiving support from activist groups outside the union, looks honestly at why members might have voted in favour of the insulting strike deal, and challenges the familiar narrative of rising costs and falling profits in a changing industry–which, of course, we can relate to. He is also prepared to be critical of UAW’s handling of the strike and implies that they were more interested in labour peace than winning. These are all things I am usually disappointed to find lacking in comics about labour struggles that tend to have a more simplistic moral narrative of the good union vs. the bad bosses. In real life there are scabs and people who will settle for a bad deal, and even the union itself can’t always be counted on. If you are interested in the wires and circuitry of a retail strike, this book is a great place to look.

After waxing so enthusiastic you could slip, I am sorry to raise some concerns. Farrell has clearly been around social justice struggles for several years and has a sensitivity to human emotion. Why, then, he would choose to include a metaphor (a visual one no less) comparing aggressive bargaining to sexual assault? This is the 21st century and one would hope he knows better. It is a disappointing moment in an otherwise encouraging book.

I also felt as though Farrell could have been either more or less of a presence in the narrative. Maybe because there are so many interviews he almost doesn’t appear enough to remember what his character looks like. I’m all for humility, but in trying to perch on the fence I think he falls down with a leg on either side.

These flaws don’t change my overarching feelings about the comic. For people interested in labour struggles, or simply in social justice, this is a must-read. Normally, I feel like I have some political point I’d like to make in these reviews that isn’t explicitly stated in the work, but Farrell’s “On The Books” speaks for itself – strikes are complicated, and you can’t conceive of them as a simple struggle between good and evil. It is a thoughtful text that I hope will continue to receive attention. 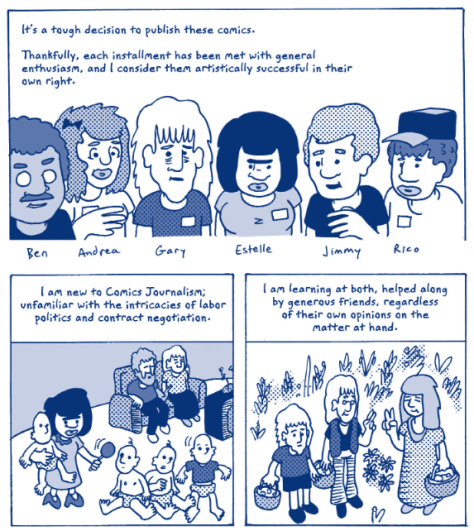