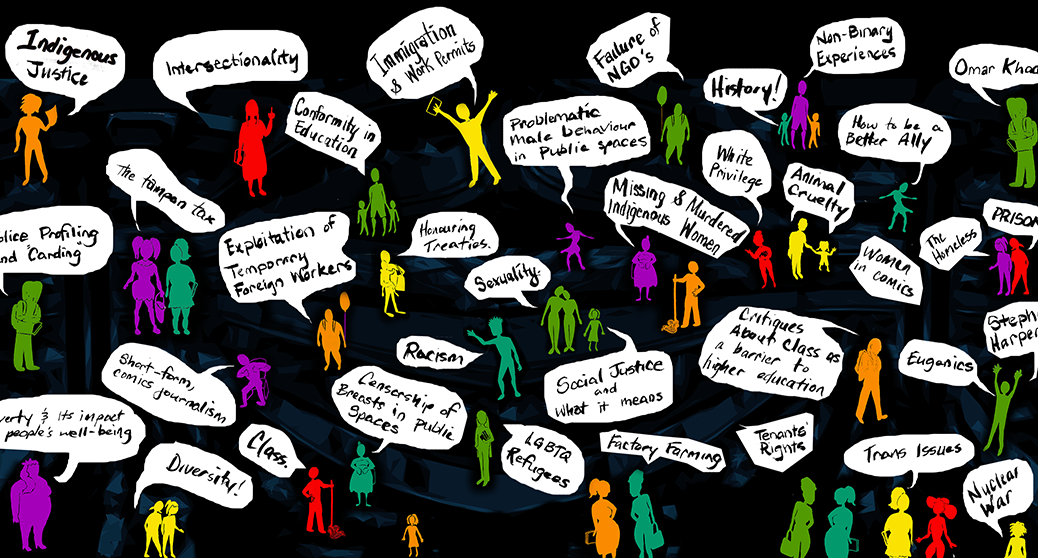 This past May, at the Toronto Comic Arts Festival (or TCAF), we joined 20,000 other comic and art fans at the Toronto Public Library. Dozens of publishers traded, hundreds of artists talked, and literally thousands of books changed hands… but how many of them were about social issues? Very few. And if that was the case, why? Do people not care about social issues? If they do, which ones to they care about?

What people told us, and how they responded revealed some interesting answers…

Many social scientists diagnose the problem of “low civic engagement” as a chronic but generally benign feature in our ‘free society’ (think democracy’s acne). The same tired symptoms –apathy, ignorance, and a lack of time and resources–would appear to be the standard-issue packaging that every common person is born with, according to these guys.

The trouble, of course, is in the framing.

Are folks ignorant/apathetic about all social issues? Or just the standard avenues by which we discuss and act on those issues in society?

Regarding the notion of free time: companies, and to some extent organizations, compel millions of people to spend time in ways that suit their financial interests: buying clothes, playing video games… TCAF compelled a small city’s worth of nerds to come and spend their weekend reading comic books (no complaints here). So citizens saying they don’t have time is really just a polite way to say that political issues, as they they perceive them, aren’t worth their time. And honestly, when it comes to a lot of stuff in governance, policy, and electoral politics, who can blame them?

But back to the TCAF survey…

We have put together this poster as the culmination of polling more than 50 individuals. It demonstrates that TCAF attendees, and by extension a small sample of Toronto’s population (young and old, diverse in racial and gender representation) would like to see comics that tackle a variety of subjects.

Two things became apparent as we were polling people…

1) Ask someone you don’t know what their political ideas are, and they may just make a face that would suggest they’d been asked for the colour and size of their underwear. Folks feel embarrassed by the question–they consider their beliefs to be something intimate, private, not to be shared easily. In other words, they care–but they worry that you don’t.

2) The opinions of individuals were, by far and large, not self-serving. Men wanted to see more comics by, about, and for women, as well as comics about problematic male behaviour. Settlers wanted to see comics about indigenous justice and reconciliation. People want to hear more from prisoners, and migrant workers. In other words, people were looking for comics to educate them about, and connect them to diverse experiences.

The world is changing. Some changes are good, some changes are bad. All things being said, there is a greater interest in being informed about the world now more than ever. But there is a very real disconnect between the halls of libraries and electronic archives, to our classrooms, workplaces and homes. The passages connecting them do exist, but they are often occupied by some troubling gatekeepers.

Online platforms and apps are here to help, but it’s not enough. As these tools increasingly become the territory of our workplaces, learning through them can become a source of increasing anxiety. Less “fountain”, more “cold, jet-spray garden hose” of knowledge, amiright? What if there was a format for information that could relax the anxious and engage the apathetic?

What if this sense of social and political disconnect could be mended–or built anew–with comics?

What if comics were keys to personal empowerment, community development, and social change?

How much of a student’s attention could be saved with comics in their curriculum?

How much could a community benefit from comic art that promoted healthy relationships and living?

How contagious is important information that is an enjoyment to be shared?

The “market” of Ad Astra Comix is not in the back of a comic book store, where non-fiction comics are traditionally found. Our market is in every classroom and workplace, every neighborhood, every living room–even bedroom. (We will read comics about subjects that we aren’t even comfortable to talk about, and we might share those comics with total strangers via social media). We are only limited by our capacityy to produce on par with the demand–which is huge.

We hope you’ll join us in acknowledging that the concept of political comics will only appreciate in value. We look forward to a busy year of bringing you the kinds of comics YOU want to see. (And don’t forget, we’re starting the hashtag #TheresAComic4That on Twitter, Facebook and Instagram to help you find what’s already out there!).

Until next time! …And remember: the Panel is Political.

One thought on “If You Could See a Comic About Any Social Issue, What Would it Be?”