After working in and around a variety of activist projects for 10 years, Nicole Marie Burton founded Ad Astra Comix in 2013, as an aspiring political comics artist in search of a community. In the years that have followed, Nicole has presented on the history and nature of political comics, facilitated youth workshops and “Feminist Drink-N-Draws” to encourage this community. She has also contributed to the publishing and printing of each Ad Astra title, beginning with a re-issue of “100 Year Rip-Off” in 2013. She now works full-time for Ad Astra Comix and as a freelance illustrator. Her portfolio can be viewed here.

Her illustrated work currently includes ‘Coal Mountain,’ a short history of the B.C. Corbin Miners’ Strike of 1935 (part of the Drawn to Change anthology); ‘Eugenie SHARK!‘, a graphic biography of the late marine biologist Eugenie Clark, and ‘DOGS‘, a webcomic about the findings of the Qikiqtani Truth Commission.

“Currently my favourite comic is tied between ‘Bad for You‘ by Kevin Pyle & Scott Cunningham, and ‘UnterZakhn‘ by Leela Corman. It’s tough to find good political comics for kids, and  “Bad for You” is all about engaging young minds, encouraging them to think critically and politically about the things they love. I just finished “UnterZakhn” and am just blown away by the storytelling and intersections of class, feminism, migration, antisemitism,  and sex work. It’s really hard to find political comics that are both politically solid and tell a story beautifully.. UnterZakhn achieves that balance.”

Born in the frozen wastes of the National Capital Region, Hugh is an amateur historian, mediocre poet and full-time internet snarker. He enjoys print, pints and pines. Deciduous trees are ok, too. He identifies as an intersectional or synthesis anarchist.

Since graduating from Trent University with a B.A. in History, Hugh has worked as a freelance writer and researcher. He worked as a subcontractor on projects for the Truth and Reconciliation Commission, and the Qikiqtani Truth Commission, an experience that helped provide the basis of the comic ‘DOGS‘. Hugh was involved as an organizer, media contact and misfit toy at Occupy Ottawa, and has been involved in Food Not Bombs chapters in three different Ontario cities. He writes intermittently on his blog, and recently had an essay published in ‘How Queer!‘ by On Our Own Authority Books.

“Hands down one of my favourite comics is ‘Tintin: Breaking Free‘. I grew up with Tintin comics so there’s just something irresistible about a subverted Tintin comic where he learns about the importance of intersectional politics in the class struggle.” 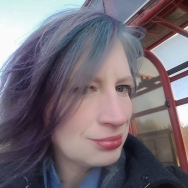 Heather Bostelaar is the anarcha- queerfeminist who wrangles the numbers at Ad Astra. She’s passionate about labour justice, cephalopods, and booze. Her fave comic is Robot Hugs because it makes her feel authentic emotions despite years of retail labour induced dissonance.