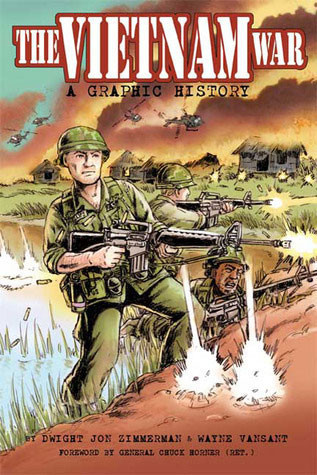 Some discussion has come up around Ad Astra Comix and a recent addition to our stock list– a graphic history of the Vietnam War. Not only does the book gloss over major historical events, like the Gulf of Tonkin incident (and the fact that it never happened, yet was a major cause for the war to escalate). The historical narrative, which has had 40 years of time for reflection, comes to some very troubling conclusions. As a new generation looks back on Vietnam as the war of their Grandmothers and Grandfathers, and as a generation that has been raised far too comfortably around operations in Iraq and Afghanistan being “business as usual“, there is a serious need to dispel this re-write of history in the comic record. -NMG.

As the U.S. aggression in Vietnam escalated in the mid-1960s, the liberal Cold Warrior Walter Rostow, an advisor to John Kennedy and Lyndon Johnson, spoke of the need of “winning hearts and minds” of the Vietnamese, at least those under the control of the US client regime in Saigon, if US force was going to prevail. As the barbarity of the venture — the toll in lives destroyed and the devastation exacted — spread, the invaders not only failed on that front in Vietnam, but also lost the campaign for political support, the battle for hearts and minds back in the States.

The war makers, of course, suffered a humiliating defeat despite their firepower. Failing to defeat militarily what was primarily a peasant-based anti-colonial and nationalist movement already decades old, it also lost the war on the political, ideological and cultural levels. Never having them in the first place, it never won the bulk of the Vietnamese people. The war machine murdered, maimed and debased too many and destroyed too much for that ever to happen. Those that survived, after all, were not about to buy the nonsense about “freedom” and “liberty” churned out by US propaganda specialists and parroted by a succession of corrupt, murderous regimes in Saigon. All the claims of the American “Free World” mission to save the country from “Communist Peril” rang hollow as that tiny land was scorched by what amounted to in a massive fly-by shooting.

Defeat in some sense became inevitable, a done deal, when the Washington war makers simultaneously lost large swaths of political support at home. They lost the battle of ideas, the claims and justifications, and explanations of what the war was about as the body counts and war costs mounted.
That loss of domestic political support for the war has never been forgotten, especially by those intent on winning future wars abroad who have come to view that home front defeat as a significant “lesson” of the conflict, not to be repeated.
In their ongoing efforts those still imagining that Vietnam could have been won and those already invested in current and future interventions have utilized every available means at their disposal to revise and reframe the  story. At that level, the portrayals and accounts in the popular culture – television and film, in music, art and print media, even the comic book press – have long been been utilized in the campaign to mold “hearts and minds”, especially among the young and the impressionable, the potential recruits and fodder for future imperial campaigns.
Few recent examples illustrate that fact better than Zimmerman and Vansant’s graphic rewrite of the Vietnam war’s history. Well-illustrated by the clearly talented Vansant and shrewdly scripted by Zimmerman to include the actual words of participants, the book in some ways has more to do with the present than it does with some approximately accurate portrayal of what the US did to Southeast Asia. 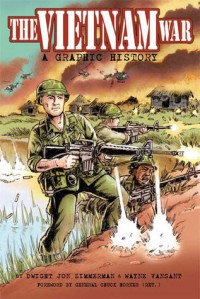 Title: The Vietnam War – A Graphic History
Written by: Dwight Zimmerman
Illustrated by: Wayne Vansant
Published: New York: Hill & Wang, 2009. 143pp
Now, of course, it can be rightly argued that the writing and depictions of history are always selective and that all historians make choices and have an agenda, an axe to grind. and that a graphic history could not possibly be comprehensive in any sense of the term. That all remains true since the agenda of this rightward revision of the war on ‘Nam comes clear right in the opener, in the foreword written by the retired Air Force General, Chuck Horner.
A combat pilot during Vietnam, Horner later commanded the U.S. and allied air assets during Desert Shield and Desert Storm. According to the publisher’s boilerplate accompanying his account of the Gulf War co-authored with fiction writer Tom Clancy, he, Horner “was responsible for the design and execution of one of the most devastating air campaigns in history.”

Horner, in one page, casts Vietnam in terms clearly pitched to the novice, the young high-schooler or working class kid, perhaps.

“Like other wars,” he tells us, America’s war in Vietnam, “began with a premise of good versus bad and which was which depended on whom you side with.” Well, okay for the obvious, war as some shape shifting morality play.
He then proceeds to explain that, “As the conflict dragged on, those views changed into the reality of a dedicated, committed North Vietnamese enemy and the committed-but-not dedicated US led-coalition.” The implication is simple (and simplistic): The US and its junior “coalition” partners (Who they were, he doesn’t say) lost because they weren’t dedicated enough, didn’t have the endurance or the will to win. Or, by implication, one running throughout the book, that their determination was undermined not so much by the tenacity of the Vietnamese adversary but by the falling away of support at home.
He goes on: “President Kennedy had committed our nation, but then President Johnson instituted polices that lacked dedication.” Here, immediately, one of the main themes of the conservative accounts creeps in: the war came to be lost because the civilian leadership, especially the politicians back home lacked the guts and the determination to see it through.
Following Johnson, “President Nixon became dedicated to getting us out of our commitment (to whom or what, Horner doesn’t say), but at “great cost to our honor.” Apparently even Nixon, known during the height of the war as the “Mad Bomber,” is viewed by this former Air Force lifer as aiding and abetting the commission of that sin of sins among the military, dishonor. (In some sense Nixon ended up getting a dishonorable discharge, but not for the major war crimes for which he should have been tried.)
What might be drawn from all that? Horner lays it out: “Years later, in Desert Storm, our politicians and our military, remembering the lessons of Vietnam, set goals and conducted operations that deserved our unqualified commitment and dedication.” That matter of dedication and steadfastness, once again.
Horner then raises a second read on the history commonly forwarded by the right: “In the case of the Vietnam War, the divergence of political will and goals resulted in constraints on our military operations.”  Disregarding or not knowing that war is the extension of politics, he seems to suggest that the whole thing could have been “winnable.” If only the military didn’t have to fight with “one hand tied behind its back” and they weren’t “stabbed in the back” by the peace movement and their allies in the “liberal” media.
The old canards die hard.
Horner tells us, as well, that “our South Vietnamese ally’s leadership could not rally the dedication of its own people.” As venal, repressive and as illegitimate as the US-bolstered Saigon sham of a government was, could it have been any different?  Horner may think so, but few others versed in the history appear to hold that peculiar line.
The Good General asserts, in closing, that Zimmerman and Vansant have come together to present the history, “in a clear and comprehensible way.” He concludes his foreword by describing the work’s present day purpose: “It serves to enlighten those for whom Vietnam is only academic history, so that we may be armed against making the same mistakes in the future.”
Interspersed with occasional accounts of heroic efforts by troops on the ground, the bulk of the narrative is loaded with half truths and craftily retooled tellings.  Parts of it read as if it was selectively scripted by someone with the suppressed memory of a sleepwalking amnesiac.
This tale — an illustrated comic after all — might seem “comprehensible” to the novice, those unfamiliar. After all, if Vietnam was nothing but a series of mistakes made mainly by a civilian leadership at home, unwilling to fight to win, then a further mistake, perhaps, might be made by one looking to this work for some understanding, today, of what that criminal enterprise perpetrated against the people of Southeast Asia actually was about.

Allen Ruff is a U.S. Historian, Social & Political Activist; Host, Thursday’s “A Public Affair” – WORT, 89.9fm, Madison, Wisconsin; & Writer of Non-Fiction and an Occasional Novel. You can find more of his writings on his blog, Ruff Talk.