The events depicted in this comic are as recent as last Friday (January 15, 2016). We wrote, drew, inked, and did layout within 48 hours, in time for Savannah’s Martin Luther King parade, in which the Poor People’s Campaign participated.

This comic and others are viewable on our Patreon Page, where we are collecting pledges to continue doing this work. 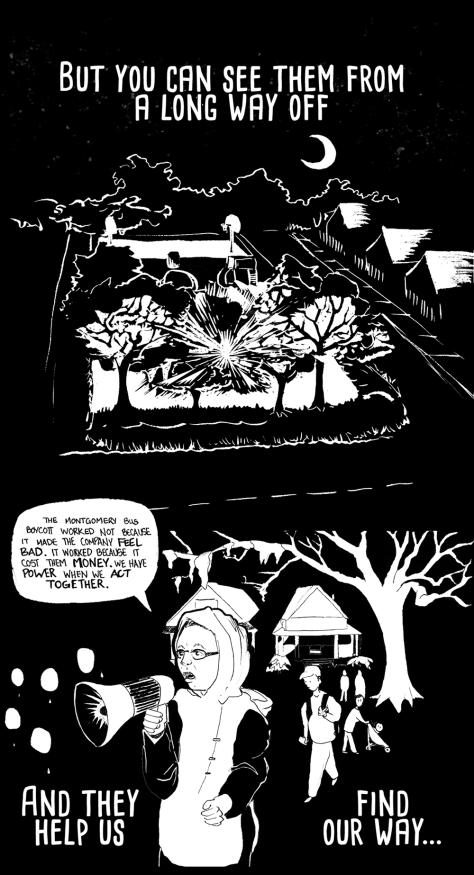 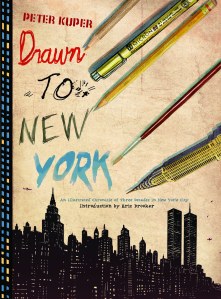 “Clearly New York was a dangerous place where terrible things could happen, but also a place that could turn ordinary people into superheroes.”

Kuper’s recently published work is building on the available literature making an argument for “graphic biographies” – not for people, but for places. Cities. Something attracts us to these massive collections of social activity that take on a life and personality all their own, and actually change us in the process. Radical artist (and former New Yorker) Eric Drooker postulates in the beginning of the book that people move to NYC as much to find careers and connections as they come to find themselves. Drawn to New York is a dedication to that power.

The book is a mash-up of a few different categories of work. There’s an intimacy in the quick sketches that are clearly drawn in the moment, on the subway, in cafes, (which conversely make you feel as close as you can be to that original scene, while also conveying that this book is really allowing you to peruse someone’s private journal/sketchbook –which is just the best thing in the world). As you peruse these pages, your eyes taking in a mesmerizing quantity of geometric shapes (so many right angles, so many windows!), a section of sketches will be punctuated with a longer piece of sequential art that tells a short story. As you read, the work more or less gets better and better; I can only assume this is because it is ordered chronologically, but I’m not sure.

The power of Kuper as a “New York artist” really shines in his highly-detailed stencil comics (made with multiple layers of stencils and spray paint), like the collection of New Yorker facial expressions, or his 2am trip to the top of the Brooklyn Bridge, or his commentaries on gentrification and crime.

Beyond the actual aesthetic of his work, the variety of perspective here is pretty broad, and is perhaps a part of Kuper himself being a New Yorker and an outsider (he’s originally from Cleveland–which oddly enough, has its own amazing graphic biography by Harvey Pekar.) His work goes from feeling like a love letter to an observation by an anthropologist of a place that is completely his “other”.

Towards the end his work has gotten pretty sophisticated, with pieces of comics journalism coming in about major NYC events, like his strip, “The Wall”. This piece, and every other, seems set in its conveyance that this great city is great for the same reasons it is so unstable: it is constantly in movement.

Or in Kuper’s words:

“This city is change. That’s its glory – it’s a perpetually unfinished canvas, offering up possibility to each successive wave of artists.”

A showcase of city and artist, with an interesting interplay between the two. That is, Peter Kuper is now, undeniably, a “New York artist”… the city shaped him. And in return, Kuper continues to pay tribute by making art that adds to the city’s ever-evolving mythos.