Title: The Beast: Making a Living on a Dying Planet
Publisher: Ad Astra Comix, 2018
ISBN: 978-0-9940507-8-6
Additional Specs: 118 pages, black and white (with full-colour satirical ads at the front and back of the book).
Meta tags: environmentalism, media literacy, advertising, communications

This graphic novel is based on the research of Dr. Patrick McCurdy, Dept of Communications (Ottawa University)

Purchase this book here
Canadian customers only at this time.
International buyers, please e-mail us for payment instructions.

From environmentalists to oil sands workers, this book has something for everyone to chew on. Full of difficult questions and imperfect answers, ‘The Beast’ offers the kind of uncomfortable chuckle that comes from the creeping tendrils of existential dread tickling our sense of uncertainty. Join Callum and Mary as they drift through bars, strip clubs and vegan wing joints not so much struggling to answer life’s difficult questions as doing their best to avoid having to ask those questions in the first place. Peppered throughout the narrative is a dismantling of the glib cliches that make up our current, intractable discussion of energy policy. 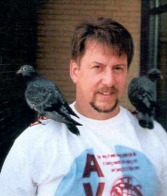 No one contests that in October, 1983, Pete shot and killed Constable David Utman. But for the headline to say only that Pete was a ‘police killer’ is to tell an unforgivable lie. It might have read ‘Award-winning AIDS activist Peter Collins’ or ‘Fearless champion of animal rights Peter Collins’. A more honest headline could have said ‘survivor of child abuse Peter Collins’, in recognition of a portion of his trauma.

There is another unforgivable lie in that headline. ‘Peter Collins dies in prison’. They use the neutral word, dies, as though there’s nothing else to say about it. But here’s something that needs to be said: the prison system murdered Pete. When he found blood in his urine he asked to see a doctor. It took them months to fulfill his request. Bladder cancer can be treated if you catch it early. But for Pete it was too late.

To tell Pete’s story the headline might well have added another word at the end. That word is ‘alone’. Though his cancer was known to be incurable he was denied compassionate release. He might have spent the last weeks of his life reunited with his family. With his friends. With freedom.

But whether it’s for love of the police or the profitability of sensationalism, no headline is going to tell that story. For that you’ll have to read his book, ‘Free Inside’, published by Ad Astra Comix. Featuring comics, original art and writing by Pete and those who knew him, ‘Free Inside’ is no fit tribute to a man whose indomitable spirit cannot be captured by mere print.

But at least it tells the truth.

Preview of Art in “Free Inside”

Things you can do to help:

Pre-order copies of “Free Inside” for yourself, your classroom, your church library, or your social justice organization by e-mailing us at adastracomix@gmail.com

After more than a decade out of print, readers around the world are getting ready for “War in the Neighborhood”.

Visit the “War in the Neighborhood” Crowdfunder Now!

War in the Neighborhood is 320 pages of largely unheard history. First published in 1999, WITN is a story about smashing cinderblocks, filling in the cracks and finding our future in the rubble. It tells the story of New York City’s Lower East Side in the late 1980s, when it came under attack by wealthy developers, cynical politicians and that special kind of daring yuppie who thinks that gunshots in the night are a sure sign of a hip ‘hood. The panels may be black and white, but the moral questions raised in the comic are anything but.

It may be hard to imagine that a story set at the end of the Cold War is relevant to struggle today. The history of social struggle, however, repeats itself. The lessons contained in ‘War in the Neighborhood’ have echoes in Occupy, Black Lives Matter and other 21st century social movements. 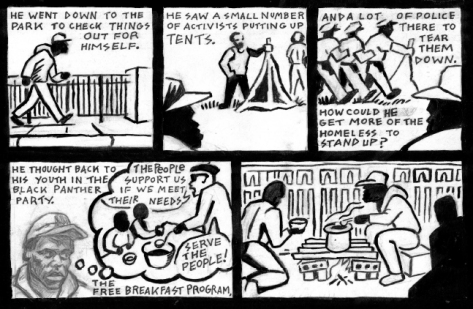 ‘War in the Neighborhood’ is the longest book we’ve ever published. Our printer tells us that it will cost about $11,000 to print 3,000 copies. In order to ensure that our publishing projects are sustainable, we make sure that pre-order campaigns like this one cover the full cost of printing. Our funding levels reflect the cost of laying out, printing and shipping these titles. That’s why we’re asking for 15 big ones in order to cover costs.

But, there are some incredible perks in this crowdfunder: workshops, original poster art, super-rare political comics… even some special offers for retailers and distros! So check out the crowdfunder and spread the word!

Ad Astra Comix is pleased to announce that our crowdfunder for a classic work of Canadian comics journalism is now live. “EXTRACTION! Comix Reportage” is an anthology of journalistic comics about the damage caused by different sectors the Canadian mining industry around the world and within the nation state’s own borders. Using research, on-the-ground journalism and original comic art, the work features stories about the extraction of uranium, oil, aluminum and gold and their devastating impact on communities and the environment.

The human and ecological cost of this industry is too often buried in the fine print of annual reports. ‘EXTRACTION!’ can help stories from India, Guatemala, Alberta and the Northwest Territories reach Canadians – the people best positioned to challenge these companies.

‘EXTRACTION!’ touches on a number of issues of interest to our readers including colonialism, indigenous rights, ecological devastation and corporate malfeasance. It also features work by a number of contributors who have gone on to do exciting things, including journalist Dawn Paley and artist Jeff Lemire.

Ad Astra Comix is an independent Ottawa-based comics publisher. We believe in the power of comics to share the stories of regular people and speak truth to power. We have no investors, stockholders or friends in high places – just an enthusiasm for comics and social justice.

Organizations, individuals and local book retailers are encouraged to participate in the crowdfunder. Funding rewards range from a copy of the book before it’s available in stores, to custom-made comics about the mining issue of your choice, to a lump of coal delivered to the Canadian Government, on your behalf. 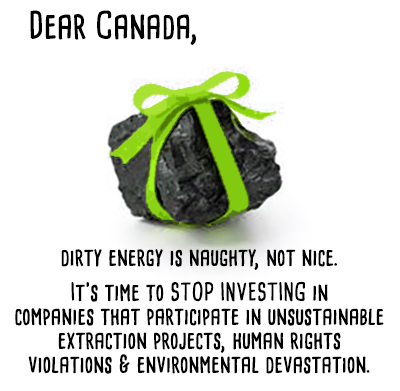 ‘EXTRACTION!’ has already been published once and has sold the entirety of its print run. By republishing it, we hope to share these stories and help Canadians understand the high cost of cheap commodities. By contributing to the project or simply sharing it with people you think may be interested, you can help us reach that goal.

If you’re interested in contributing to the publication of ‘EXTRACTION!’, or want to know more about the project, you can check out our crowdfunding campaign. For information about Ad Astra Comix, including other titles we carry, workshops we offer and critical coverage of political comics, check out the rest of this website. To get in touch, please e-mail adastracomix@gmail.com. You can also follow us on Twitter @AdAstraComics or like our page on Facebook. 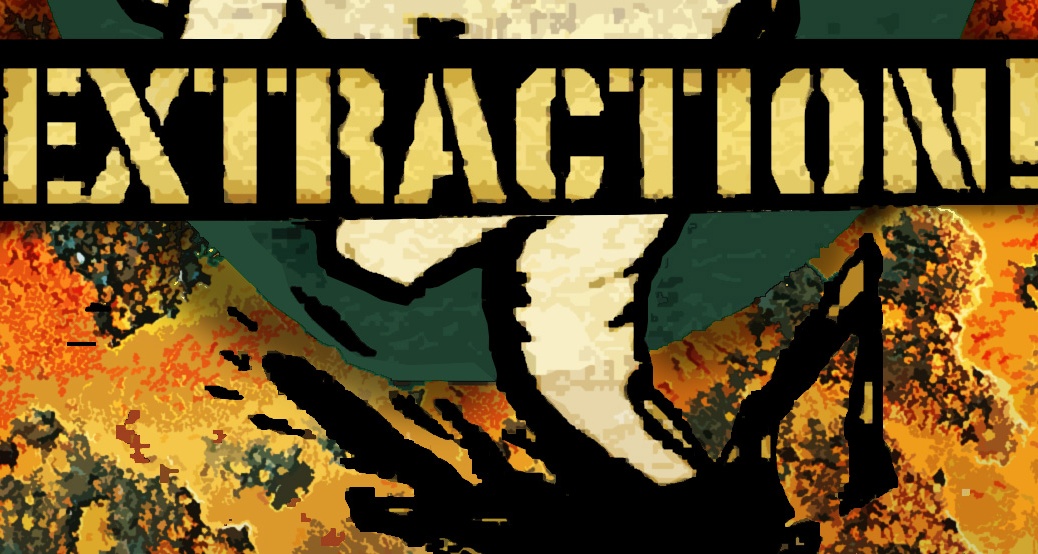 Ad Astra Comix is pleased to announce that “EXTRACTION! Comix Reportage” 2nd edition is back from the printers!  With a thoughtful combination of research, on-the-ground journalism and original comic art, ‘Extraction’ features stories from major  industries–uranium, oil, aluminum and gold–and their devastating impact on communities and the environment in Canada, India, and Guatemala.

UPDATE: ‘EXTRACTION! Comix Reportage’
can now be ordered through our online store!

The human and ecological cost of this industry is too often buried in the fine print of annual reports. “EXTRACTION!” can help these stories reach Canadians – the people best positioned to challenge these companies.

In May 2016, we sold pre-orders of “EXTRACTION!” through a 40-day crowdfunder. Organizations, individuals and local book retailers were encouraged to participate. We also offered special “perks”, like sending the Ministry of the Environment a lump of coal for the poor record on holding extraction projects to account, as well as custom-made comics about mining projects. 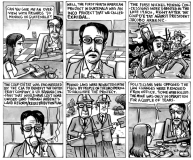 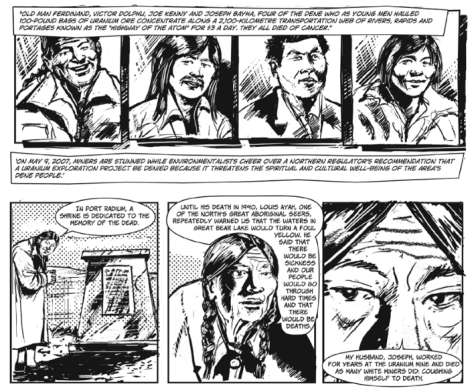 Ad Astra Comix is an independent Toronto-based comics publisher. We believe in the power of comics to share the stories of regular people and speak truth to power. We have no investors, stockholders or friends in high places – just an enthusiasm for comics and social justice.

Visit our online store to order your copy today.

Ad Astra Comix and Zubaan Books are pleased to announce a North American edition of the groundbreaking comic title ‘Drawing The Line’. The book is a 162-page anthology of 14 accounts by Indian women of their day-to-day experiences in India, illustrated by the authors. After a successful debut in India, ‘Drawing the Line’ is coming to North America where a whole new audience can glean insight from the diverse perspectives of its contributors.4
Sept 1 Update: Drawing the Line Officially Open for Pre-Orders!

Released as part of an ongoing national conversation in India around sexual violence and the experience of women in public spaces, ‘Drawing the Line’ is an anthology of comics that range from comics journalism to autobiography. Though some of the comics address sexual violence, other themes include beauty standards, patriarchal attitudes in the workplace, experiences of sisterhood on public transit and other experiences of womanhood in India.
Although the sexual assault case that sparked this national conversation around gender in India was covered in the western press, that coverage has been heavily skewed. Sexual violence has been portrayed as an Indian problem as though it was not also common in North American society. Rather than allowing western media to speak for Indian women, this title presents the individual, on-the-ground experiences of women in their own words and pictures. 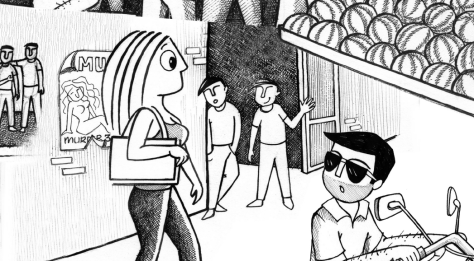 At a time when white feminism is struggling to embrace intersectionality in a meaningful way, titles like ‘Drawing the Line’ offer western feminists an opportunity to engage with the lived experiences of Indian women in other parts of the world. For South Asian women living in the diaspora, ‘Drawing the Line’ represents an opportunity to compare similarities and differences between diasporic life and the experience of women still in India.

Zubaan Books, the title’s Indian publisher, are an independent feminist publishing house based out of New Delhi that has been operating since 2003.
Ad Astra Comix is a Toronto-based comics press specializing in the production and publication of comics and graphic novels that amplify marginalized voices. Founded in 2012, Ad Astra is working on several publishing projects in addition to ‘Drawing the Line’.
Press Contact: Nicole Marie Burton
E-mail: adastracomix@gmail.com
Phone: 1-647-863-4994