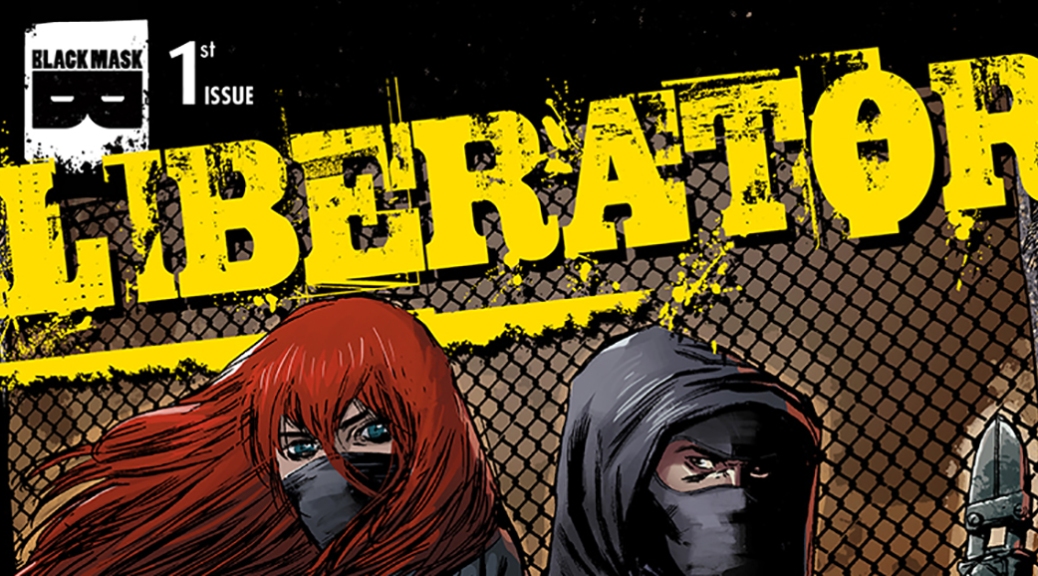 The series opens with one of the main characters taking down a dog fighting ring. It’s a feel-good moment where a few horrible people are given their just desserts, and some dogs get the justice they deserve. 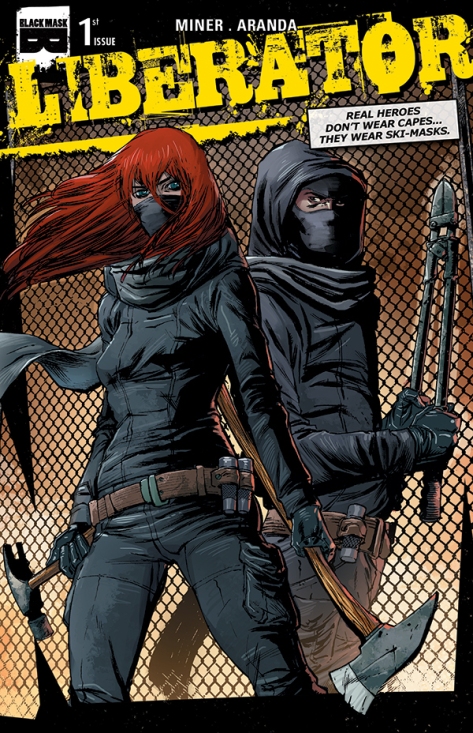 Liberator is a series that tells the story of two animal liberation activists who save dogs and other animals from abuse. While one has a long history of making a public presence in activism, the other chooses to work in the shadows, taking direct vigilante-style action against abusers, most of whom are themselves breaking the law with their activities. Each issue comes in at about a dozen pages of full-colour graphics, and is coupled with literature (located in the back) on animal rights work.

I do tend to approach my comic reviews in two ways. One is aesthetic: is the story good? Does the art kick ass? The other side of my reviews tends to focus on political/social relevance and its method of delivery. Like the Bechdel test, a comic that is most politically relevant doesn’t make it a good story—nor are the two mutually exclusive. They embody separate goals, hopefully ones that work together. 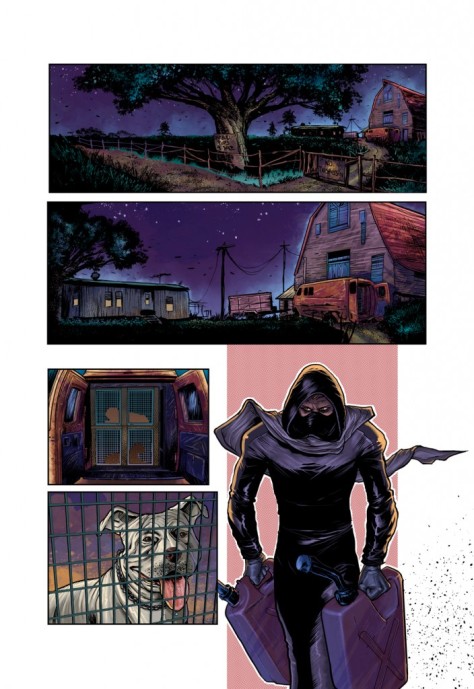 Aesthetically I think Liberator is pretty impressive. It is more or less self-published under the new label of Black Mask Studios, after a Kickstarter campaign that brought comic and animal lovers together quite successfully. Key points in the comic show some really nice artwork with great colour schemes.  I don’t quite feel a connection to the narrative yet, but it is only Issue #1.. (I point this out because Matt Miner made me cry within about 6 pages of his story “Light” in the Occupy Comics Issue #2 that just came out– so my standards are high with him. Great comic, by the way. Read it. Read it now.)

In only a dozen pages, the comic nonetheless makes lots of commentary, and not just on animal rights. One is that a lot of people who literally devote their lives to helping others (humans or animals) work the crappiest of minimum wage jobs to get by. (Check). Another is that men who encounter other men’s disrespect of women should call that shit out. (Check). I think there is also more subtle commentary here, like when a black man refers to a dog he is abusing as “his property” (irony?) –or the never-ending activist debate with regards to making effective change by political protest vs. other more creative, even illegal forms of resistance.

(All of this is hypothetical in a comic book, of course. Which is what makes it so great.)

Liberator clearly has an agenda. Guess what? Everything does, including comic books. My opinion is if you’re pouring your life/money/job into creating something and you’re not using it to say something meaningful, you’re making a bad investment  There is a self-awareness in political comics that the project’s completion will be able to further assist with a topic that generally lacks creative avenues of discussion–like animal abuse, or violence against women, or mistreatment of prisoners. For a long time the comics community and activists of varying causes have waved the other away–“No one will buy that.” “Sounds campy.” “What’s the difference between a comic with a political agenda and propaganda?”…..and vice versa, “A comic dumb’s down the topics we’re trying to discuss,” “Comics take time and money,” and again, “No one will buy it.”

To fit a lot of potential discussion into such a small space is indicative of the medium’s ability. So even if I’m not totally compelled by the narrative just yet, my hat goes off to the Liberator team, and I look forward to picking up the next copy.

I have funny, petty criticisms of Liberator (like, No one wearing a Conflict shirt would wear blue cargo pants) that boil down to me thinking/writing out loud. But I also felt it was honing in (maybe too much?) on a small minority of psychotic animal killers and abusers. I mean, how many of those can there be out there?

The day after I read Liberator, my husband wouldn’t stop talking about Mike Vick’s dogfighting bust, and I just couldn’t get it out of my mind that this was a man who obviously didn’t live in the shadows, and he has a thing for training dogs to kill other dogs, and motivating them through methods like pressing a hot iron against their faces. He was a superstar football player with thousands of people following him on social media, laughing at his jokes, and ready to buy whatever he endorsed. And he killed animals for fun.

Is the animal-abusing psychopath …common? Or perhaps regardless of its frequency of occurrence, does that make it any less real or disturbing where and when it happens? Maybe there are issues that effect a larger swath of our population, like the number of homeless pets out there, but comic books focusing on extreme crimes and abuses is nothing new.

…as a side note, the special edition cover of Issue #1 absolutely wins my heart over. I will be following this comic closely, and I encourage others to do the same.

One thought on “Liberator #1”