Well, it’s the first week of November. I don’t know about any of you, but I’m always late to the punch for Halloween, preparing a costume, organizing parties and such. If you love Halloween as much as I do, it’s a tragedy that calls for remedy every September. Well, if you’re looking for a spooky piece of history to read about in the lead-up to next year’s All Hallows Eve, consider reading ‘Witch Hunts: A Graphic History of the Burning Times’. 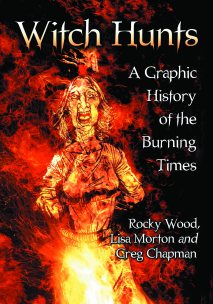 The ‘Burning Times’. Just this phrase sends a shiver up my spine. It’s difficult to believe that, from the 15th to 18th centuries, hundreds of thousands of Europeans, mostly women, were condemned to death for the more-or-less imperceptible crime of witchcraft (exact numbers are disputed). This graphic history is an accessible look at the era, offering anecdotal evidence for a lot of good starting points for further reading.

The book is divided into many short chapters: 1) Before the Trials, 2) The Trials Begin 3) The First Witch Hunter, 4) The Contagion Spreads, 5) Joan of Arc, 6) The Trial of Arras, 7) The Hammer of Witches, 8) Witchcraft and the Reformation, 9) The Trials in Würzburg, 10) King James and the North Berwick Trials, 11) Matthew Hopkins, 12) Witchfinder General, Salem Witch Trials, and 13) The Frenzy Fades.

Perhaps the breadth of this book is its greatest shortcoming; history is a difficult subject to abridge, and even more challenging to illustrate. But the author and illustrator do their best to give us a basic synopsis of everything, as opposed to an in-depth look at any one time or place.

The backdrop of this period was one where political and economic opponents would use the fledgling structures of ‘law and order’ and the ignorance of a population as the stage for their power plays. The book opens with a compelling example, pre-trials: the burning of the Knights Templar in 1314. King Philip the IV of France owed this wealthy organization a great deal of money, but had successfully condemned them to the stake with charges nearly impossible to prove: idolatry, heresy, and sorcery. In Jews, Muslims, pagans, and even uncooperative Christians, men of courts and men with connections found infinite ways to scapegoat these “others” in dark and difficult times. 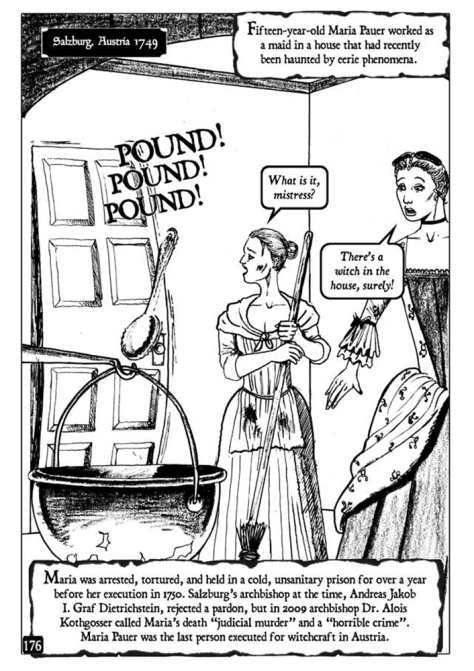 In Medieval Europe, the most common “others” were women. Women served a number of roles that were unknown to most men: the midwife, prostitute, and herbalist were all relatively common vocations. Healing was a craft that was passed down from women in families and communities for generations, and served  a community need. As time passed and private land ownership overtook The Commons, a woman who was widowed would inherit her husband’s lands, doing with them what she wished. Even in these very limited realms, women were granted a certain amount of power and reverence in society.

As men took various stations within Church and state, many found ways to usurp the authority of women in these traditional roles through what became known as the Witch Hunts, or Burning Times. Women were blamed for premature deaths, plagues, and failed crops. They played on locals’ greatest fears, which were were impossible to disprove.  In turn, midwives and herbalists would be replaced by male doctors or “barbers”, landholding widows could be removed, their land parceled between Church and state. It became a veritable gold rush of opportunity, in a time when misogyny allowed such distrust and outright contempt for women of a community.

But ignorance can take on a life of its own, in time. As the book explains, the Catholic Church outright denied the existence of witchcraft for some time. This required Witch Hunters to make their accusations and arguments on grounds of heresy, or demon worship. Still, belief in witchcraft spread until the Church and its adherents took a more committed position. This was manifested in the works of Heinrich Kramer, a witch hunter and the author of Malleus Malificarum, or “The Witch’s Hammer”. 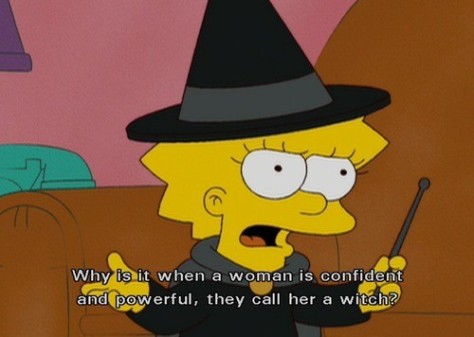 As mentioned, the book has its shortcomings. The illustrations are very busy, and look more like sketches opposed to final proofs. The writing lacks a feeling of wholeness, as if these various chapters of history have all been thrown together without additional analysis, which isn’t altogether wrong, but isn’t particularly to my liking. Rather, what I see is a missed opportunity to connect all of these cases together to answer questions about the changing relationships of religious, political, and economic forces in Medieval Europe. The transition from The Commons to private property; organic or pagan communalism to communities with the Church as the uncompromising epicenter of public life; and the role of women as healers and community leaders to second-class citizens under a rigid patriarchal order. Those looking for this kind of analysis would greatly benefit from works like Caliban and the Witch, and the 1990s documentary, The Burning Times. Both are available online for free.

Ultimately, I place most of the blame for the book’s drawbacks on a curse of bad, uninspired editing. Graphic histories like these require an editor and publisher who are passionate about both the design and content of such a product, and yet I’m given the perception that this book was released  by McFarland little of either. Despite this, “Witch Hunts” remains an intriguing and chilling read.