How many times has some variation on this theme been thrown in the face of some well-intentioned person?  They’re “just trying to understand”, and how can they do so if you won’t explain? As an upper middle class white dude, I remember asking such innocent-seeming questions myself, failing to appreciate what the Audre Lorde quote above explains: educating your oppressor is draining!  I was lucky enough to have a kind and very patient friend to deliver a staggering series of savage defeats in debates I had imagined I’d won.  It took years for the implications of her arguments to penetrate the murky sludge of privilege and teach me an essential lesson: it can be hard to understand what we do not experience.   The experience of oppressed people and our difficulty in understanding it makes them an other, separate from us  and outside our understanding. 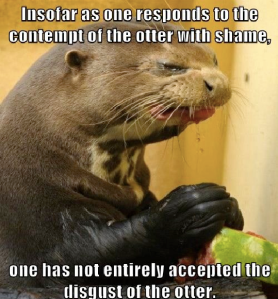 For those unfamiliar with this academic term, the “other” describes the relationship of those excluded or oppressed by a group or society by virtue of their identity.   You know what they say where clarity’s concerned: “a .jpg is worth a blog post but a meme will do in a pinch.”  So there’s a kind of emotional truth to the expressions of the otters linked above that we wouldn’t get from a graduate course on the subject.   The appeal of a snarling otter over the excruciating tedium of a dozen French philosophers is obvious.  This otter is asks us to go beyond feeling bad about our privilege and understand it is disgusted with our failure to do anything about it – or maybe just disliked that chewed up watermelon.

But otters keep a busy schedule and can’t be everywhere!  Luckily, there are comics.  The internet has helped broadcast the voices of the oppressed to a wider audience than was previously possible. People who would struggle to get a speaking role on a third-string sitcom can have audiences in the hundreds of thousands, and comics are one of the most accessible media to do so. For regular people struggling to understand how their privilege can be harmful to otters, comics beat the heat of the librarian’s stare when your intellectual sweat starts to stain the aging furniture your local bibliotheque.

Comics can be an excellent way to visually represent concepts that take ages to present in text. That’s 500 years of exploitation in six panels, and if it lacks the nuance of a textbook on the triangular trade, hey, it’s a starting point. An interested person with good intentions can proceed from here to Google, Wikipedia or the nearest library. It is the beginning of a frame of reference. Most importantly, it conveys an emotional truth.

So much of oppression hinges on emotional truth. One can produce endless statistics on mortality rates during Atlantic crossings, the value generated by slaves for the American economy, the value of unpaid housework to the capitalist economy or whatever else suits you. But notwithstanding statistical significance, you know what they say: tell a human story, people can relate. If you want to bore them, use statistics.

While there might be a startling brutality to statistics on trans suicides, many may find it easier to relate the above comic to their own experience of breaking difficult news to their parents. It is always the case when unpacking your privilege that a dash of empathy goes a long way, and if the personal is political it’s electrical too. So comics are a place to plug in, and that’s always good. They can be especially effective when someone who shares your privilege uses comics as a way to speak directly to your experience, and acknowledges the frustration of being called out while you are trying to educate yourself. If this comes with two scoops of tough love, at least you can see yourself in the face of the person behind the pencil.

Nothing, of course, is universal. But the beauty of comics are their incredible diversity. Not every comic will illuminate every question. Seeking understanding is catching fish with your bare hands, slippery at the best of times, without mediating that search through art. For those of us hoping to improve our allyship, it is alright to admit that we just don’t get it. Sometimes, we may have no reaction to a given comic at all.

And that’s ok. In our journey to understand the differences that separate us, and the way our behaviour has the capacity to harm people, we do not need to instantly grasp every concept that’s presented. Some questions have answers you can’t put in comics, or books for that matter. Ultimately these are questions rooted in human experience and therefore best addressed through human interaction. Still, if you want to avoid putting your foot in your mouth and potentially hurting someone’s feelings, comics can be a great place to start. You never know whose life you might make a little easier. 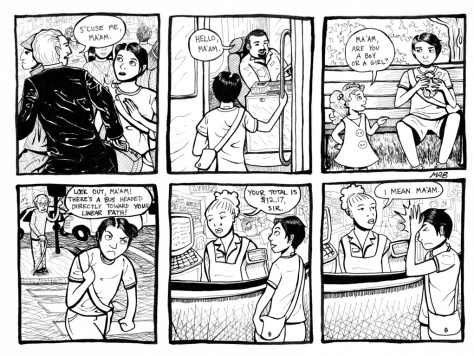 Ad Astra Comix is building an index of comics to help prospective allies educate themselves! In the meantime, check out some of web comics linked here with permission from the artists–or e-mail us if you think there’s a particularly crucial comic to have on the list! If the comic in question comes in print, we may be interested in ordering it, so feel free to contact us about that, too. 🙂