As part of our expanded Promotions section, we will be bringing together a monthly digest of political comics from around the world, in search of support. Here is a listing of past crowd-funding projects that we have publicized.

Freak’s Progress is twenty-first-century take on the morality play, a traditional theatrical form that demonstrated morally and socially correct behavior. Hasse’s goal is “to explore the deep heterogeneity we live with, and how that heterogeneity can create both deep understanding and radical confusion,” based on her “experiences as an artist, educator, social justice advocate, and resident of urban neighborhoods in transition.”

Hasse has an extensive portfolio of her work available on her website.

This project is accepting funds through the end of the year. 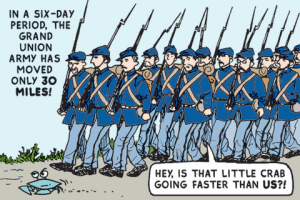 Starting in 1995, Boyd has been adapting stories of United States history into comics featuring a Chesapeake Bay blue crab named Chester. Originally, the strip syndicated in Virginia with the goal to encourage voluntary non-reading children to engage with history. Now, Boyd seeks funding to digitize his entire collection to make them available to everyone.

During this digitization project, Boyd is also planning to expand on Chester’s adventures through American history by adding more jokes, more details, and by providing links to on-line history resources. 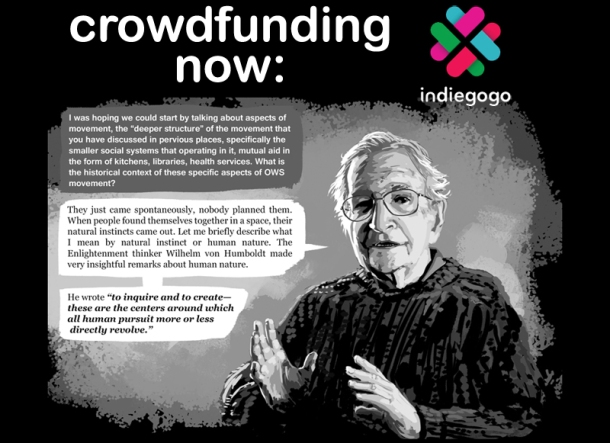 Recognize that chunky sweater?! That’s right, folks–that’s Chomsky, in comic form!
On Indiegogo now is an exciting new political comics project. Click the image above to check out the campaign – or any image on this page, for that matter!

Writer and Illustrator Jeffrey Wilson and Luke Radl are putting together a graphic novel developed from an interview Wilson conducted with Noam Chomsky in 2012. For those familiar with Chomsky, you may understand me when I say that he is a wealth of information that is perhaps difficult to take in all in one sitting. Most recently, I heard him interviewed on CBC Radio Q, on the topic of NSA and spying programs–and just as a side note, Chomsky mentioned a great deal of information with regard to COINTELPRO and the counterintelligence programs that waged war on progressive groups in the 1960s and 1970s. It’s a lot of history and analysis to take in in 10 minutes. And that’s why I think a graphic novel interpretation of Chomsky is so promising. In the words of the creators,

“We take the historical examples used and give them a depth that might otherwise be glossed over. For example, when Chomsky mentioned the Free Speech Movement of the 60’s during the interview, we do the research and take you back to that time period so it is not just a passing reference but a real and dynamic moment.  This work is important because it will offer not only an introduction to the thoughts and insights of Chomsky but the graphic novel form allows us to layer information and move the reader through time and space in unique ways.”

With that said, Wilson and Radl have a lot on their plates…. and that’s AFTER fundraising $15,000. 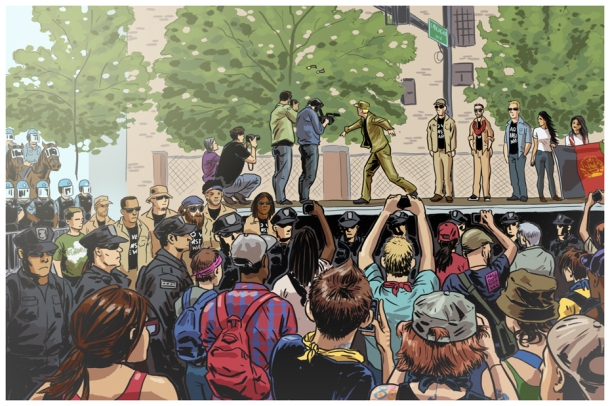 As for artwork, I can’t think of many other contemporary comic artists who could do better than Luke Radl. He initially got my attention on Cartoon Movement with his comics journalism coverage of the 2012 NATO protests in Chicago, in which members of Iraq Veterans Against the War, led by 3 young Afghan women and peace activists, marched to the gates of the summit. Veterans, in the fashion of the protest on the Washington Monument during the Vietnam War, threw their metals over the fence in one of the most powerful acts of protest I have seen against the war in the last decade. It was an incredible thing to see illustrated. His full portfolio can be viewed here: www.lukeradl.com/illustration

Just came across what appears to be an amazing war comic project on Kickstarter. I highly recommend people check it out–if not to add to his already-attained goal–but to pre-order a copy of what is surely to become an incredible comic.
The White Donkey is the creation of Max Uriarte, an artist and US veteran who served on two deployments to Iraq. His regular web comic, Terminal Alliance, features often-funny shorts about army life. While not a military person myself, a lot of my closest friends (including my husband) are veterans–and the stories definitely ring true with what I’ve heard before.

There is richness in those stories that is baited with a bittersweet intrigue: war stories and military life draw just about every observer into it. And because war has a tendency to bring out both the best and worst in a human being, it will forever be a popular subject within all creative media.

Comics are no exception. In fact there is plenty of evidence to prove that comics pioneered a lot of the more realistic portrayals of war–I go into this at length in my post on Harvey Kurtzman, Two-Fisted Tales, and the birth of the anti-war comic.

Max is an incred

Comics with a Cause has just hit the $1,000 mark on Indiegogo. Let’s help them make this happen.

News of this project totally hit me by surprise. My husband was the one to point it out to me- a new fundraising campaign for a web comic series, inspired by the question of “What men can do to end violence against women” launched by Rodrigo Caballero and his fiancee, Babette Santos in Vancouver last week. What struck me was that, not only did this project sound amazing, but that Babette–who I know completely outside of the world of comic books–was a bridesmaid at my wedding in Vancouver. What a small, wonderful world!
It sounds like this is going to be a pretty slick web comic with a great opportunity for it to be brought into print. The informative nature of the subject matter makes me happy that, once the initial funds are raised, there is no hindrance to anyone benefiting from its contents: a free web comic is a free web comic.

Through networking and contacts, Babette and Rodrigo have already drummed up a lot of initial support in the women’s rights community in the Lower Mainland– at women’s centers, shelters, and through advocacy groups. I think this project has the potential to do something amazing: please, instead of giving money to Gawker (a media company worth over $300 million) to see a 30 second cell phone video of my mayor smoking crack — support something positive. Support Comics with a Cause!

ibly talented artist and storyteller. Check out his work, see for yourself, and consider pre-ordering.

This project is not to create a book for a regular readership. Prison Grievances is written specifically for inmates of the U.S. prison system, fundamentally focused on education and empowerment. The book, reviewed by people at all levels of the prison system from judges to former inmates, details the step-by-step process for filing complaints with the court system, requesting a special piece of equipment due to a disability–whatever the case may be.

While this book may come across as little more than a practical tool for someone in a different situation than you, it serves a great purpose. The fact of the matter is that 1 in 12 Americans have been in the prison system, and over 2 million people currently sit in jail cells–that’s more prisoners than the People’s Republic of China (which, by the way, still has more people than the U.S.) Anyone who still thinks that the prison industrial complex isn’t a problem should do some more reading on the matter – maybe start with Shane Bauer’s recent heart-wrenching article in Mother Jones: “Solitary in Iran Nearly Broke Me. Then I Went Inside America’s Prisons.”

Leclercq has taken the right approach in tackling this titanic challenge that we face as a society (whether we admit it or not–prisoners becomes ex-prisoners, who are then our co-workers, neighbours, and fellow citizens), and is attempting to hand these men and women a valuable tool. If this project speaks to you, please check out the pitch page and make a donation.