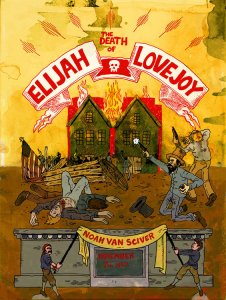 Title: The Death of Elijah Lovejoy
Author: Noah Van Sciver
Published: 2011, 2D Cloud Micropublisher
Got My Copy: At TCAF 2012, but you can order a copy through their website: www.2dcloud.com or by contacting the author at http://nvanscriver.wordpress.com

(Noah Van Scriver puts out some regular strips through his blog. I picked up this piece from the Toronto Comic Arts Festival last year.)

As I wind down from my trip visiting my Mom and Grandma in Lawrence KS, I felt it poignant to review a comic that takes us back to that notable time of Midwestern history when neighbours, friends and family alike were literally at each other’s throats over the question of slavery.

The Death of Elijah Lovejoy is about the untimely demise of one of the country’s many little-known abolitionists. Elijah Lovejoy was a church leader, writer, editor, publisher, and staunch abolitionist. The man had a life that was defined by two fundamental struggles in American history: the struggle against slavery and racism, and the freedom of the press. A monument of Elijah is dedicated to these fights in Alton Illinois, where the man took his final breaths. Earlier in his years, Elijah had caused great controversy when he protested the killing of escaped slave Francis L. McIntosh, who was chained to a tree and burned alive in Elijah’s town at the time of St. Louis, MS.  His stance on the McIntosh murder, and his persistence in printing anti-slavery literature, would follow him to his grave.

I’m not too worried about sounding the spoiler alert with this review: the title gives away the cold reality that Elijah dies. The comic is a play-out of that final evening, when a mob of angry villagers has Elijah and his colleagues surrounded at the location of his printing press. (This was his 4th printing press—the previous three had been seized and destroyed by mobs.) 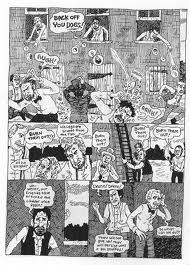 Van Sciver uses his simple, black-and-white illustrations to depict Lovejoy and his colleagues as they defense Elijah’s fourth (and final) printing press in Alton. The text, particularly the conversations, are hypothetical, but probably not far from what was said that night. The panels plainly show the unwavering sense of righteousness that was felt on both sides of the slavery issue, in which men would level buildings, hunt each other down, and burn people alive to make a point.

For more information on the comic, check out the links above. For more info on Elijah Lovejoy, the internet reveals that his story is not altogether forgotten. Here are a few links.