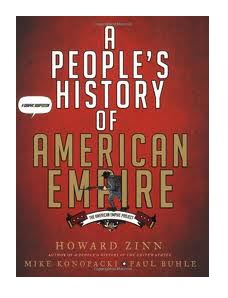 It was two years ago this month – on January 27, 2010, that Howard Zinn passed on. He was 87 years old. While he was arguably the most important American historian of the 20th Century and wrote a library of work–including his milestone, A People’s History of the United States–a fun fact is that the last publication he released during his lifetime… was actually a comic book.

The gravity of Zinn’s legacy tends to make singular reviews of his work impossible. A review of one work necessitates a contextual understanding of his life as a radical historian who in turn, participated in making history during his own time. That being said, I will assume that readers will go elsewhere to get their crash course on Zinn, so my review stays under 10,000 words.

This book is beautifully presented. It is now available in soft- or hard-cover, and at about 12″ x 20″, is a little too big to comfortably sit in my lap as I’m reading it. My assumption is that the creators chose a larger format because the work is so text-heavy.

That text is important, because Zinn is arguing a still-contested notion, and needs as much evidence to back up his arguments as possible. It begins with the annexation of Indigenous lands across what is now North America in the later 1800’s, and takes us to the present post-9/11 era of relative global military hegemony.  Zinn’s thesis is relatively clear: all of modern U.S. history is a history of empire; however, there is a parallel history of life and resistance by many. This includes poor and working people, who have played major rolls through unions, churches, and other community groups; women, students, and minorities of many stripes have all had interesting parts to play in a history that is largely told, in Zinn’s words, from the perspective of only “certain white men” (implying the rich and powerful).

Compared to A People’s History of the United States, which first appeared as a piece of academic achievement, American Empire reminds me more of a documentary film. Zinn is shown giving a lecture at an anti-war event, introducing and concluding the book’s chapters, which jump to varying times and places. Major historical figures like Black Elk, Mark Twain, and Eugene Debs are in these chapters, speaking as if to the reader, in scripts pulled largely from their real-life quotations and writings. The creators have chosen to accent this large-scale historical narrative with Zinn’s own personal history, as a young unionist, a WWII Air Force bombardier, and finally, as a young radical professor during the Civil Rights and Vietnam War eras.

What you get here is an interwoven account of his research and his own personal account of the 20th Century.  It’s a moving way to look at a history that was told to most of us very differently in school.

Visually, it’s all a lot to take in, especially if you want to appreciate the illustrations as well as the text. I see this book being most appreciated when you can read it in segments. This makes it perfect for classrooms or study group. Each chapter is about 6 pages.

But just because I support the work in principle doesn’t mean the review is all roses, right? I have a few critiques of the book, rooted in my perspective as a comics lover + writer, and as a history enthusiast who cannot overestimate the impact Howard Zinn has had on my education.

I’ll get right to the point:

I’m not a fan of comic book adaptations–of books, movies: anything. My experience with them has been largely that they are a lose-lose product: the comic book becomes a simplified medium for what was in its first stage a more complete and highly-developed creative product. (Insert any comic book adaptation of anything here: Game of Thrones, The Last Unicorn, Ender’s Game, etc. etc. etc.) On the other hand, the comic medium is dis-serviced by simply being a highly-saleable vessel by which to re-release something that’s already out on the market. In short, if you’re doing a graphic adaptation, you’d better be bringing something incredibly special to the table.

In this regard, I think this graphic adaptation of Zinn’s past work has both some hits and misses.

First, let’s talk about the hits.

(+) Of course, a comic book makes available a lot of the information that Zinn has, largely, buried in pages upon pages of academic text, filled with all the usual footnotes and supplementary reading. So it’s accessible, and that’s especially important to young adults or classroom settings, as I mentioned before.

(+) The book does in fact compile some new information, largely the primary sources used to assemble its “interview”-styled segments with historical figures like that of Mark Twain shown above. That and the additions of Zinn’s personal experiences make it a more colourful work than any *one* of his texty-texts.

(+) Some of the graphics that have been added to this volume, including the contemporary photographs, political cartoons and other artwork of the time does much to enrich the narrative. It’s always illuminating to have this kind of media–text is, after all, highly prone to editorialization–but a photograph or political cartoon can reveal something of an un-altered reality for the time period. Now, some of the downers.

(-) Personally, I find the cartoon-ish fashioning of the illustrations to be a little out of the mood of the book. This is a serious, often grim, telling of American history–there are many chapters that would have rightly moved me to tears, if not for drawings that look like they came out of a storyboard for Quick-Draw McGraw. I would have gone with a different overall style. Still, even if the manner isn’t to my liking, at least it’s consistent, and professionally rendered.

(-) Many graphics are modified photographs–that’s fine–but what irks me is that whoever photo-shopped them didn’t clean them up. It’s like writing a milestone book and then not bothering to format it properly.  I don’t know why political comic books continue to disappoint me in this arena. It’s as if they see the quality of form and content as mutually exclusive. Or they think that readers just won’t care. 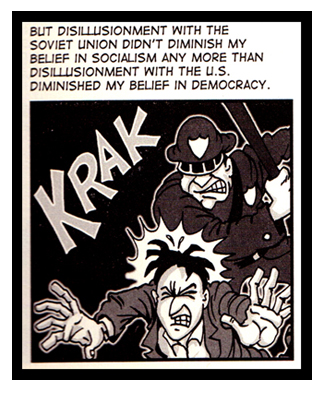 Some won’t: that’s true.
But for comic book connoisseurs as well as artistically-minded comic readers, this is what ultimately determines the quality of the work… i.e. the amount of love that went into it.

In my opinion, we’re in the beginning stages of a second golden era for comic books–with political and historical comics, for the first time, being seriously included in the festivities. The last thing you want is to be invited to that party and then let people down. Think I’m making a mountain out of mole hill? Maybe. I’ll come back to this in a moment…

…first I gotta to drill into your heads, again, why Howard Zinn was (and IS) so important. Don’t worry, it won’t take 10,000 words.

As I touched on before, when A People’s History of the United States was published in 1980, the words “People’s History” were neither a mainstream term nor a methodology. Academically speaking, it was a new argument: History didn’t have to be that of kings and “great men”, or, as Henry Kissinger put it, “the memory of states”. It was revolutionary. He introduced the historical equivalent of ‘the 99%”–an overwhelming proportion of human history sits in the stories and memories of common folk–and it was right under everyone’s noses, being largely ignored.

By 2008 when this book came out, Zinn was already an icon. This book has led to countless additional volumes written or based on that first People’s History.  Like supplementary reading satellites, they revolve around the foundation of that first work. Here are a few:

Audio renditions of his work are narrated by Matt Damon, Viggo Mortenson, and others moved by his work.

Here are a few books written by other historians, composing a “series” founded on Zinn’s original work:

What we are reviewing here is one of those publications. There is no other historian, mainstream of no, who can claim such a franchise, nor such a significant intellectual imprint.

What I’m trying to say is this: when I see imperfections in comic books, I think of two things:

– Creators/editors who lack experience in comic books (lots of indie/underground comics, as well as quite a few political comics, whose creators are firstly activists or academics; not comic book-makers). This often points to a lack of necessary funds and time.

With People’s History of American Empire,  with all due respect, a little may be true of both.

But it kind of doesn’t matter what I think. At the end of the day, what’s important to me is figuring out what the end user (the reader) is thinking; and that’s what I’ve tried to do here.

Why does it concern me? Because I would never want someone to read this book and find out that their lasting impression of a work was “rushed attempt to make money”–when its origins are so profoundly the opposite in motivation.

Political comics will catch on. As the importance of non-fiction comics grows, more and more investment will be put into making a product with a cause that is indistinguishable from the mainstream players. But for now, the fact that this is one of the most well-circulated political comics of the past few years shows that we’ve got a little ways to go.