March: Book One is the first part in a trilogy graphic memoir detailing the life and times of Civil Rights activist and Congressman John Lewis.

Growing up in the United States, you’re led to believe that you learn all there is to know about the Civil Rights Movement in school. You learn about Martin Luther King and Rosa Parks and the Montgomery Bus Boycotts; you learn about the most famous American speech of the 20th Century: “I Have a Dream”.

In a recent article shared through the Zinn Education Project, historian and black activist Bill Fletcher Jr. describes the method by which certain moments and people in the Civil Rights movement have been “mythologized” and “sanitized“. And boy, has our understanding of this history been manipulated! We would be led to believe that forces of the status quo in the 1950s and 1960s–from local police departments up to the President’s office–supported non-violent forms of protest; that racism and racists were isolated to the masses of simple folk in the South.

Of course, the result of this is that students are not understanding the context of these important pieces of history. That is why I’m hopeful of a book like March making its way into classrooms… students deserve a broader view of these issues than what will be allocated to them in 2 or 3 paragraphs of a standard-issue textbook.

As John Lewis, Andrew Aydin, and Nate Powell so eloquently show us in March, this was not the case. The Civil Rights movement was a bloody, uphill battle. The struggle and its gains were not the results of a few actions by those now famous historical figures: the movement moved by way of thousands of committed activists, many of whom were students.

This is a truly beautiful comic book that paints a portrait not just of a man (John Lewis was one of the leaders of the Student Non-Violent Coordinating Committee, and is now a Congressman; he is also the last living person to have given a speech alongside Martin Luther King on Aug 28, 1963). It paints a vivid portrait of a movement that you think you know, but maybe, possibly, probably don’t. Why was non-violent civil disobedience so radical at the time? Why were there rifts between the younger activists and the older black leadership–figures like Thurgood Marshall? How was the Civil Rights movement connected to religious groups? To the labor movement?

Nate Powell has a way of making every picture personable–crisp, yet dreamy, with solid black ink brush strokes complimented by dabbles of watercolor staining. And Andrew Aydin, who works on Congressman John Lewis’ staff, has obviously been instrumental in taking the vast treasure trove of information that is John Lewis’ life experience, and organizing it into an epic memoir. I particularly like the stories that attest to his core character, like growing up on an old sharecropper farm, wanting to be a preacher and practicing his talks on his chickens. These are wonderful stories that bring out the humanity behind the political battles.

These are the stories from the Civil Rights Movement that, I believe, reclaim the history and restore its heart and soul. You can’t learn about a protest movement from a government-sanctioned textbook.. they’ll make you think the whole thing was their idea. And although Congressman Lewis is now a part of that system, well… how he got there will be explained in the next two books of the trilogy.

I’m excited about what I’ve seen so far–this is an often raw, ugly–yet true history of the Civil Rights Movement in the United States. To get a glimpse of this, I’ve asked the kind folks at Top Shelf to show you the first five pages of March. I hope you see what I mean–and be sure to pick up a copy when you get the chance! 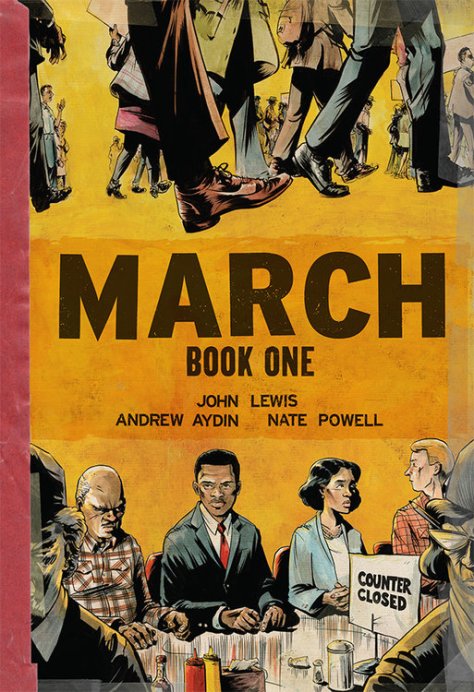 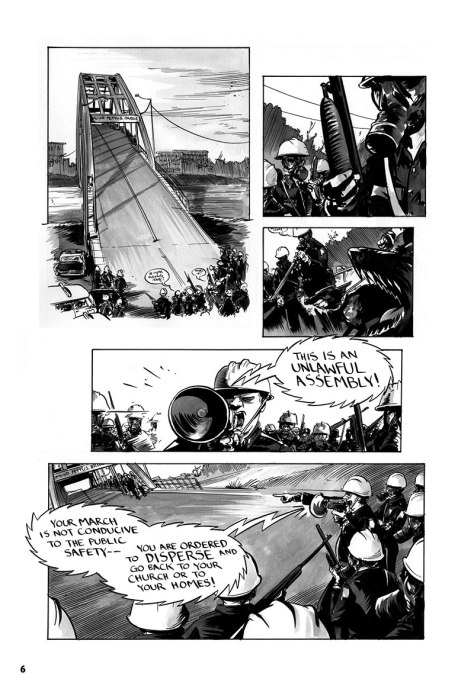 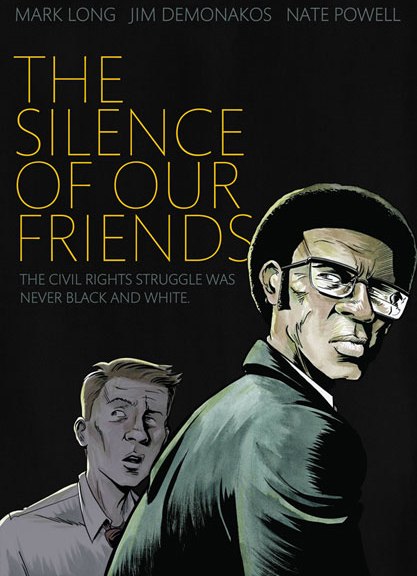 L.P. Hartley said, as noted in the book, “The past is a foreign country. They do things different there.”

Taking place in Houston, Texas, in 1968, The Silence of Our Friends is a brief memoir of Mark Long’s childhood against the backdrop of his town’s peaked racial tension. The title comes from that famous quote by Martin Luther King Jr., who said, “In the end, we will remember not the words of our enemies, but the silence of our friends.”

Long was raised in a white, Liberal, Christian middle-class family—as American as apple pie, it seems. They find themselves in Houston when Mark’s father, Jack, moves the family to take a job as a TV camera man and the TV station’s “race reporter”. Through his job, Jack befriends a local Civil Rights leader, Larry, a teacher who has rallied students at a segregated university in the 3rd Ward—Houston’s impoverished African American community. The school’s administration banned the right of SNCC to organize (The Student Non-violent Coordinating Committee—a nationwide student group elemental in the rise of the Civil Rights Movement on post-secondary campuses). For more information about this history, I recommend reading a [White-written] news article from the time period, complete with all its presuppositions and bias. This 1967 piece from Harvard Crimson paints a pretty good picture, in addition to providing background on this chapter in Houston’s history.

Despite significant tensions, Jack and Larry’s families attempt to forge a bond in a time and place when it was considered against the rules for African Americans to be in a “white” neighbourhood  even at the invitation of community members, and the Ku Klux Klan openly passed out flyers for their monthly meetings.

The story is told masterfully against many different backdrops that reflect the memory’s time and place: images of the Vietnam War constantly on TV, rodeos and ‘crabbing’ as weekend past-times. The writing displays an intimate recollection of the events of this time and place—subtleties that pop for modern readers, because so much seems to have changed. A little boy pretending that he’s a soldier in Vietnam; a mother politely arguing with a next-door neighbor about how the war is wrong; a Black man quietly observing that he hasn’t spoken to a white person for any length of time since he was in the Army. One of my favorite scenes is when the children of Jack and Larry’s families are getting to know each other. They spend a good minute just looking at each other. Then they take the time to feel each other’s skin and hair—to investigate difference innocently, without the obstruction of judgement or power dynamics. This is captured most beautifully by Mark’s younger sister, who is blind.

Nate Powell’s artwork equals the story in quality and care. I’ve been a fan on Nate’s work for so long that it’s sometimes impossible for me to appreciate the specific things he does to make a particular work stand out for what it is. The flow of panels here is so well mastered—using song lyrics of contemporary hits (like Sam Cooke’s  “A Change Gonna Come”) to guide us from one scene to another. His artwork is never static—each page is presented with an amazing overall aesthetic. Backgrounds jump from open and white to closed in and dark; the realism of a car driving down a street will be spotted with emotive/expressionistic shapes from the headlights. When I look at his work, I feel like I could be in a dream, where reality unhinging is a slight and beautiful thing. (I also can’t but notice that the subtitle of the work is “The Civil Rights Struggle was Never Black and White”–and Nate, who often works only in B&W, has used a lot of grey tones here.)

There is no other comic book that really compares to this work—it is unique and educational as much as it is personal and moving. However it seems to be opening the doors for more work of a common history—Powell has done artwork for another comic documenting Civil Rights history, March (Book One) written by Congressman John Lewis, Andrew Aydin. I look forward to adding this work, alongside The Silence of Our Friends, to my bookshelf. 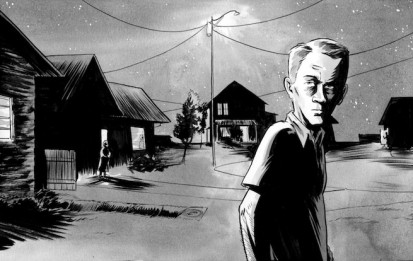