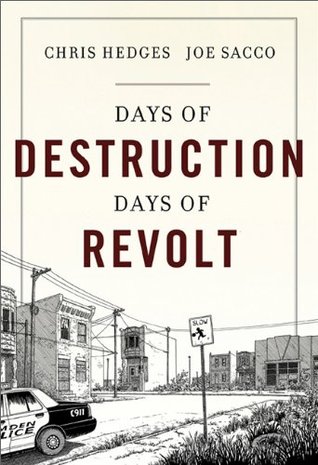 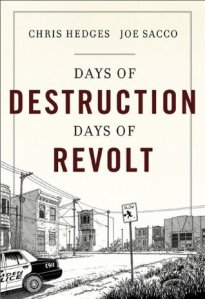 Chris Hedges was trained to be a minister, and Joe Sacco is known to draw comics. Both, however, have made their strongest marks within the realm of journalism: Hedges as a foreign correspondent reporting from Central America, the Balkans, the Middle East, and Africa. Joe Sacco made comics journalism a concrete category with works like Palestine, Safe Area Gorazde, The Fixer, and others.

It seems only natural that the two would work together. They have overlapped each other’s geographical locations of coverage on a few occasions, particularly with Israel/Palestine and areas in the Balkans. Both understand the complexity of what they investigate and the need for empirical as well as historical inquiry. 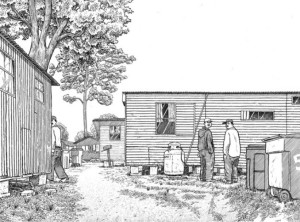 But what I find intriguing about Days of Destruction, Days of Revolt is the way I see their previous work illuminate these pages to reveal a truly devastating picture of the state of America. Hedges draws on a treasure trove of historical events he has personally witnessed or painstakingly researched to show how the elite of the U.S.A. may not be as invincible as they think; Sacco’s trademark illustrations immediately recollect visions of a street in Gaza—and yet, I’m not looking at a street in Gaza here; I’m looking at a street in Camden New Jersey or Immokalee, Florida.

To be clear, the book is about a little more than destruction and revolt. Those two points are the focus of two separate chapters. Others include:

What is recounted in these pages isn’t sensationalism. Sensationalism would imply that truths were stretched, or quotes taken out of context. What it amounts to is a gallery of some of the worst places to live in the United States today—regions termed by Hedges to be “the sacrifice zones” of unfettered capitalist exploitation. And therein lies the fundamental trouble with DDDR which digs at you through your read of it: that is, from cover to cover, it’s all true. 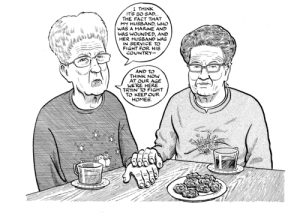 Each chapter is an article written by Hedges, documenting their travels to a particular site. Locals are interviewed and are the subjects of most of Sacco’s illustrations in the book (his work is typically either a landscape for an area, or a person talking of their experiences.) Within this format, Hedges makes invaluable use of his time as a foreign correspondent, drawing on that experience to show how these regions are being treated much the same as third-world countries under foreign occupations, domestic dictatorships, or the suffocating yoke of international debt. This is contrasted with his written descriptions (and Sacco’s visuals) of the people who inhabit these areas: most are simple people whose definitions are blurred, sometimes completely overtaken by the hardship around them. Hedges and Sacco point out strength and sacrifice in those they interview, as much as they profile individuals who, understandably, in the words of Hedges, are “living lives in which tenderness and security are grabbed in desperate snatches.”

This work is truly a testament to those most voiceless in America today—from West Virginians dying of the coal industry’s carcinogenic air, to the millions of Latin Americans living a modern-day slavery Hell in the American South. Their stories are illuminated with Sacco’s artwork, and their finds profound historical, philosophical, even moral depth with Hedges’ words.

It will disgust and anger you, but it is a must-read.