“Youth is wasted on the young.” – Oscar Wilde

Who doesn’t read that quote and not feel some bitter kernel of truth in the words? Such energy, and no direction! Such curiosity, burned on idleness and errant adventure alike! DANGEROUS adventures, at that. One can’t help but think of their own  moments of hilarity and embarrassment  when considering the folly of youth (I myself was almost blown up by a gasoline explosion when I was 12).  Whether we look at child’s play from previous eras or to distinctly modern activities like social media and cell phones, the grievances of the old to the frivolities of youth reveal a full spectrum of conflicting impulses. On one hand, parents and adult community members wish to lovingly guide and protect. On the other, there exists a perennial fear of and intolerance to the unfamiliar hobbies and technologies ushered into social acceptance by the youth of the day.  These manifestations of adult anxiety are the basis for the content of this landmark comic book. 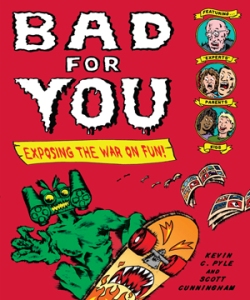 ‘Bad For You: Exposing the War on Fun’ is an impressive collection of information with a unique intersection of all that is bad for baby adults. In doing so, it invites the reader to ask interesting questions: What is bad for kids, and why?

The table of contents reads like an index to modern moral panics:  comic books, digital technology, games of all kinds (“idle hands are the devil’s playground”, or so the saying goes), –even playgrounds have an intriguing entry. All of the aforementioned have had a history of being attacked and scapegoated as “bad” or “dangerous” for our youth until an acceptably sterilized pattern can been adhered to, or until enough kids and their allies can fight back.  Noteworthy elements include graphs and narratives that help to distinguish science from pseudo-science, beginning with an introduction to the scientific method in the first chapter.   The book offers a timeline beginning in the ancient world to demonstrate that the mistrust of youth is one of the most predictable social patterns throughout history.  The book points out that there is even a term for this pattern: ephebiphobia, or a “fear and loathing for the young”.
Using statistical data and historical perspective, the book is prepping an entire readership of kids to be a bunch of real smart assess, and an entire crop of adults to rethink their own phobias. For the book’s primary audience, young readers can use the reading to get acquainted with concepts that are highly relevant
to their generation, including the ‘factory model’ school system, ageism, the criminalization of youth, the notion of civil and political rights, and the power of protest. The book is packed with inspiring instances of young people challenging (and making gains at odds with) the cobweb-thick thinking of older generations. Everyone can agree that winning and the all-around sense of achievement it brings is an important experience to have while growing up; naturally, these successful kid-powered push-backs are explored at length in the book’s final Chapter, aptly titled, “Good for You”.

Not surprisingly, we in 2014 have reached a point where fear and loathing of the young now requires its own brand! For the past few years, all challenges under the age of 25 have been invalidated by the fact that they come from a generation known as the Millennials (Did TIME Magazine call them the “ME ME ME Generation” because Tom Wolfe had already distinguished the Baby Boomers as the “Me Generation” and they just ran out of ideas?). Here are we, yet again, being dished the patronizing script of youth as lazy, self-indulgent, and playing hard and fast with their finances and futures. While the modern era has its own particularities, ‘Bad For You’ is good to point out that these are the dysfunctions attributed to every new generation of young’uns.

What this book truly brings to the table is empowerment for young minds. Notably, it critiques the status quo way of life for young people in North America as becoming largely devoid of educational lessons. It notes the ways in which young people are unheard and underrepresented, and offers intellectual and practical solutions for children and young adults alike to overcome obstacles. Overcoming the fractured–and in some ways obsolete–social systems imposed upon youth, in its own right, can and has become an important rite of passage for critical-thinking minds as they enter adulthood. 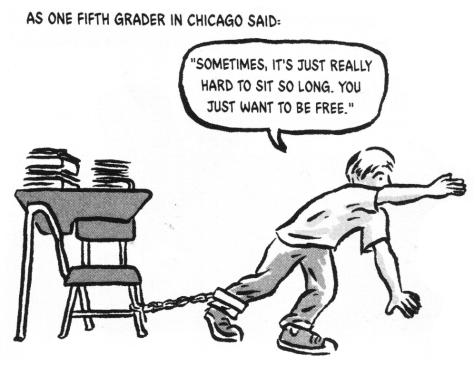 And to the reader who looks upon youth or childhood as that time in which they were simply a dumber, less reasonable, and more naive version of the person they are today: my condolences–that attitude is your loss. But it may mean that you have the most to gain from ‘Bad for You’. Learning to see our youth as a time in our lives that requires neither fear nor shame is exactly what this book is about.