It’s not particularly surprising that Jay Odjick received his first rejection letter from a mainstream comic book publisher (Marvel) at the age of 10.

Jay Odjick: “As a kid, I really dug Spider-Man – I’d read anything, but after a few years started to gravitate a bit toward the darker characters. They kind of fit more closely with my experiences and environment.
We would go and buy unsold issues for like a dime or something – the store would rip the covers off and sell ‘em cheap and we weren’t rich, so that worked out for us. Comics are a good chunk of how I learned to read.”

Needless to say, Odjick and Marvel had some divergent world views. Odjick was an Algonquin kid living off-reservation in a decimated neighborhood.

Jay: “I was born in Rochester, NY – which is where my mother is from. My father, like many other guys from Kitigan Zibi, left the reserve very young to find work, and he ended up seeing a good chunk of the upper East Coast.
I think he left home at like…13 or 14. There were quite a few people from my res working in the Rochester area – so he met my mother there, they got married and I was born in the US… like a block away from a comics store.
We moved from Rochester not long after a man was shot and killed right out in front of where we lived – chalk outline and all. [And I thought,] ‘Hey, what’s this Punisher guy like?? Ok, I get this!’”

Fast-forward 25 years. Even if Jay was then the successful comic and cartoon creator he is today, Marvel would likely continue to sneer at his work. Why? Perhaps because it refuses to fit any mainstream indigenous stereotypes that industry leaders like Marvel and DC have made millions depicting for decades. 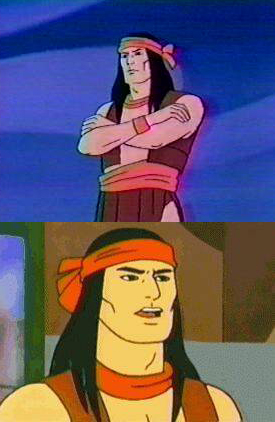 Jay: “I didn’t come across too many comics that featured many native characters as a kid – I think my first real exposure to any were in some Westerns – and then at some point, Apache Chief from Super Friends (not comics, but still). We had moved [back] to the res after leaving Rochester and I remember thinking, ‘Okay, this guy is very much unlike anyone I know – or anyone living on my reserve’. I never really felt like I saw anyone in comics who looked or acted like any native people and, as a kid, I found it weird even if I didn’t understand why.
I also didn’t understand why there were so few native characters on TV or in comics. Only later did I kind of begin to theorize as to why that was, and want to create a superhero character who did look and act like the Native people I knew.”

In his twenties, Jay created and began producing The Raven while continuing to live in Kitigan Zibi. This was his first foray into publishing comics.

Jay: “I had some some illustration work before and worked on a comic for a website – in the early days of the web – but The Raven was my first comic book. Basically, I thought there was a need for a cool, hip, modern native hero – one who native kids could relate to or who could resonate with them. Something a little dark, action oriented; something with a touch of Spider-Man maybe – but with some splashes of anti-heroes like Wolverine and Batman in there as well. It was something I’d been meaning to try to do for a few years – and decided to try self-publishing. I got out 3 issues of the series before realizing it was all too much work for one guy.”

The life of an unseasoned self-publisher is one of constant trials—from the printer to the comic shop. While Jay struggled to create, produce, and promote the work on his own, his expenses were piling up. For his next project, he aimed for a graphic novel format, which took the pressure off the machine-gun publishing schedule of single issue comics creators (typically work reserved for an assembly-line team of comics writers, editors, artists, inkers, colourists, and promotional teams).

Jay: “I was going to comic conventions as a publisher around this time and met up with Arcana‘s Sean O’Reilly – who had a booth next to me at a Toronto Comic Con, and we struck up a conversation about my book and he said he’d be interested in publishing a graphic novel.

I tweaked the concept – made it less dark and violent and de-aged the main character, Matthew Carver, by about 15 years so that he would maybe appeal more to younger readers and created the graphic novel KAGAGI: The Raven.”

My thinking with Kagagi was always – he’s a superhero who is Native – and that plays a role in who he is, of course, but you should be able to come into this world without a lot of knowledge of Native culture or what indigenous experiences are like.”

As Odjick worked on the graphic novel for Arcana, he developed his creation. Kagagi is a native character based on Anishinaabe teachings and language. The project received critical acclaim, and Kagagi was approached by the Aboriginal Peoples Television Network (APTN) for a kid’s TV show adaptation.
As any creator knows, the task of character design is a meticulous one, requiring careful contemplation. Here, Jay made some interesting decisions with regard to Kagagi as a realistic representation of indigeneity.

Jay: “In terms of visuals, I decided to steer clear of the stereotypes or tropes we tend to see associated with native super-people. I didn’t – and still don’t – believe a super person in buckskin will resonate with younger readers or maybe even readers my age.

I created a design and aesthetic that I thought would appeal to readers of all backgrounds and cultures. But in terms of Matthew’s alter ego, I really tried to visually create something that looked like Native kids today. I think that’s why so many kids appreciate the character and dug the TV series – if he’s going to be a superhero for Native audiences, those audiences have to see themselves reflected in him.”

A key element in using dynamic media like comics, cartoons, and video games to communicate complex cultural or political information is a work’s ability to be engaging on a number of levels, from aesthetic, to entertainment to education. Odjick feels the design of the Kagagi graphic novel and TV series achieved this.

Jay:  “If we want to create native superhero characters who resonate with native kids, we have to speak the same visual language in the media forms they’re accustomed to.
Now, the Kagagi ‘suit’ itself manifests when Matthew transforms – based on his subconscious, and what he thinks a hero should look like. It’s something I never got to explore enough in either the comic or the show, but that’s why he looks the way he does as Kagagi. He’s a kid who grew up reading comic books and watching cartoons and playing video games!
We would have explored in other comics and episodes that previous Kagagi bearers looked different (based on their own perceptions of a hero). Still, considering Matthew is a kid who doesn’t know a lot about his culture or background, it’s interesting that, as Kagagi, his hair grows when he transforms into Kagagi. It perhaps is meant to symbolize, deep down, how he feels he should be connected with his traditional culture…”

Jay acknowledges that both inside and outside of his comic creations, it’s a fine line for indigenous youth to navigate society’s expectations of them—expectations that can be either helpful or harmful. Settler portrayals of indigenous comic book characters have traditionally catered to the male white child’s imagination of what is indigenous: think Daniel Boone, Davey Crocket, and The Last of the Mohicans.
A part of the imagination in colonial North America is that settlers are absolved of guilt for their complacency in genocide, because they wish to adopt an indigenous custom here or a style of dress there. All the while, indigenous artists and creators are ignored.

“As a kid, it was hard because many people wanted me to work in more traditional native arts – my father especially. He discouraged me from pursuing comics, but I was what I was.”

Ultimately, it burns down to that critical question, currently searing the mainstream comics industry: regardless of character diversity, who has creative control over the design of the characters, and the stories?

Jay: “I can’t speak to much beyond my own community – but people in Kitigan Zibi have really embraced Kagagi and especially the series, because even if we aren’t delving much into culture and myths, we have created a show that exists in English with a mix (20%) of Anishinaabeg and with a language version completely in Algonquin as well.

My hope is that if kids like the show, it maybe helps them to learn the language.

Learning from previous struggles as a self-publisher, Jay worked to make Kagagi a real community effort. Algonquin voiceovers were done in Kitigan Zibi, with Anishinabeg translations read by local teachers Joan Tenasco and Annette Smith. While most of the voices were from his community, Jay was happy he was able to bring in cast members from neighboring Barriere Lake. As he was already on tight deadlines and budgets, he paid for the Algonquin translation out of pocket, recording the voiceover work himself.
But in terms of finding a larger community of indigenous comic creators, Odjick feels that there remains a great deal of room for improvement and growth.

Jay: “I think the fact that I write and draw my own stuff maybe has a bit of an isolation factor!

When I was starting out in comics I was unaware of literally any other Native creators. I was very much trying to learn about the comics industry, about publishing, publishers, who did what, etc. Now, I’m seeing more and more Indigenous comic creators, which is awesome! I’m stoked about that – but have only been in contact with a few. I drew a story adapted by Niigaanwewidam Sinclair that’s in Graphic Classics’ Native American Classics, published a few years ago. I’m taking part in the Moonshot anthology with First Hunt, which I illustrated and co-authored with my brother, Joel. It’s a story about the role hunting played in Anishinaabe life back in the day, and illustrates some of the pressures that must have come with it.

Odjick considers the Kagagi TV series a major victory with a dynamic and lasting impact. It allowed him and his community to create a powerful learning tool for language, and it convinced his community to be open to new forms of media as a way to pass on traditional teachings (Odjick is very proud that there is now a graphic novel section at the K.Z. School Library containing some 200 titles).

Jay: “If I can keep doing my thing, keep telling stories, hopefully that continues to allow me to do some good with issues I’m passionate about, like language preservation and literacy for our youth.”

Kagagi: The Raven airs on APTN every Sunday at 10 am, and is available online at aptn.ca/kagagi!