Ad Astra Comix is thrilled to announce the forthcoming release of ‘War in the Neighborhood’ by Seth Tobocman. Pre-ordering for the graphic novel began August 23 and will continue for one month on the crowdfunding website, Indiegogo.

‘War in the Neighborhood’, first published in 1999, tells the story of New York City’s Lower East Side during the late 80s and early 90s, a period of rapid change.

Although gentrification is now unraveling communities from Atlanta to Seattle, what happened in the Lower East Side was one of the earliest modern examples. Artists, people of colour, migrants, radicals, squatters, the homeless and regular working class people all called this crowded area full of abandoned buildings home. 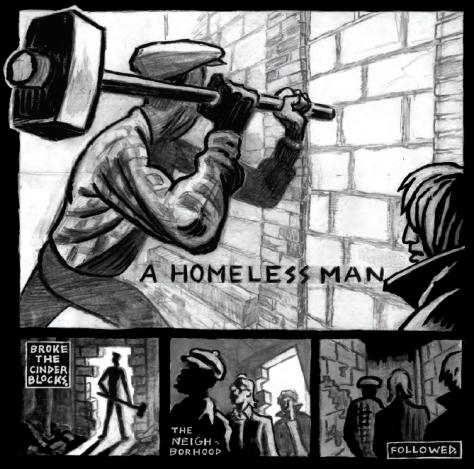 Though no one book could ever hope to tell the entire story, ‘War in the Neighborhood’ contains a full cast of artists, anarchists, dog-walkers and ex-prisoners as they fight to build a future for themselves before greedy developers literally burn it out from under them.

Modern readers familiar with the history of internet-age social movements like Occupy Wall Street will be surprised how much they recognize in these stories. Gendered violence, police brutality, factional fights and hostile news media all come together to paint a very familiar picture.

Instructive as it is for activists, ‘War in the Neighborhood’ is above all a feeling, human portrait of life in a troubled time. As neighborhood residents fight the police, the cold and each other to make space for themselves, our own hopes for affordable housing, community, and safe space are reflected on the page. In an era of market crashes and rigged elections, we recognize our own struggle to build something that lasts in a world intent on tearing us down.

It probably doesn’t need saying that I love comics. I would not have committed myself to a life of reading, writing, researching and reviewing comics if they were not very dear to me, masochistic tendencies aside. But while I adore them, political comics put me in a jam so thick I consider spreading it on my mid-morning toast. Maybe my partner’s thinking has infected me; when she started Ad Astra Comix close to two years ago as a review site, she said it was in part because the quality of political comics was generally so low.

END_OF_DOCUMENT_TOKEN_TO_BE_REPLACED 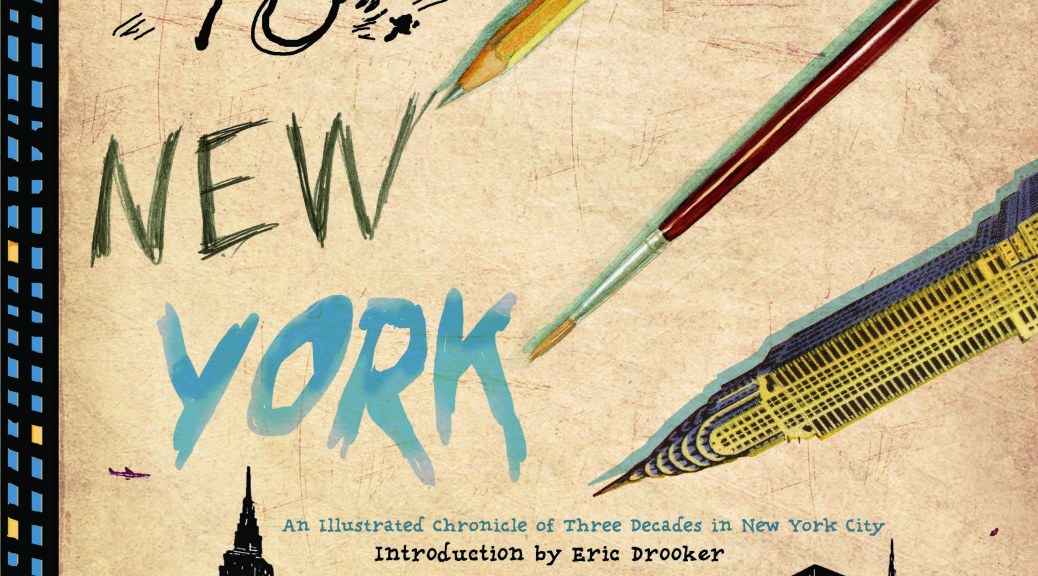 “Clearly New York was a dangerous place where terrible things could happen, but also a place that could turn ordinary people into superheroes.”

Kuper’s recently published work is building on the available literature making an argument for “graphic biographies” – not for people, but for places. Cities. Something attracts us to these massive collections of social activity that take on a life and personality all their own, and actually change us in the process. Radical artist (and former New Yorker) Eric Drooker postulates in the beginning of the book that people move to NYC as much to find careers and connections as they come to find themselves. Drawn to New York is a dedication to that power.

The book is a mash-up of a few different categories of work. There’s an intimacy in the quick sketches that are clearly drawn in the moment, on the subway, in cafes, (which conversely make you feel as close as you can be to that original scene, while also conveying that this book is really allowing you to peruse someone’s private journal/sketchbook –which is just the best thing in the world). As you peruse these pages, your eyes taking in a mesmerizing quantity of geometric shapes (so many right angles, so many windows!), a section of sketches will be punctuated with a longer piece of sequential art that tells a short story. As you read, the work more or less gets better and better; I can only assume this is because it is ordered chronologically, but I’m not sure.

The power of Kuper as a “New York artist” really shines in his highly-detailed stencil comics (made with multiple layers of stencils and spray paint), like the collection of New Yorker facial expressions, or his 2am trip to the top of the Brooklyn Bridge, or his commentaries on gentrification and crime.

Beyond the actual aesthetic of his work, the variety of perspective here is pretty broad, and is perhaps a part of Kuper himself being a New Yorker and an outsider (he’s originally from Cleveland–which oddly enough, has its own amazing graphic biography by Harvey Pekar.) His work goes from feeling like a love letter to an observation by an anthropologist of a place that is completely his “other”.

Towards the end his work has gotten pretty sophisticated, with pieces of comics journalism coming in about major NYC events, like his strip, “The Wall”. This piece, and every other, seems set in its conveyance that this great city is great for the same reasons it is so unstable: it is constantly in movement.

Or in Kuper’s words:

“This city is change. That’s its glory – it’s a perpetually unfinished canvas, offering up possibility to each successive wave of artists.” 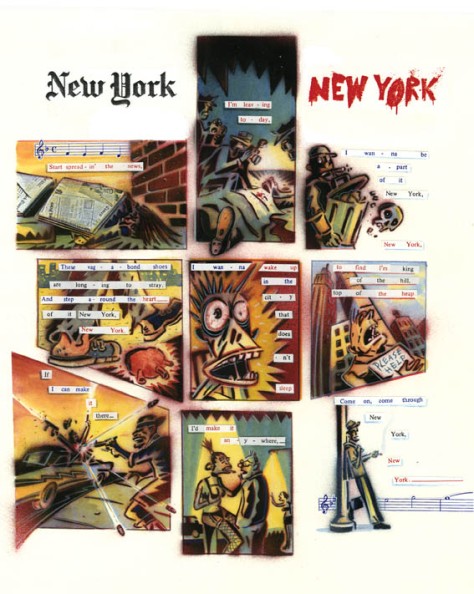 A showcase of city and artist, with an interesting interplay between the two. That is, Peter Kuper is now, undeniably, a “New York artist”… the city shaped him. And in return, Kuper continues to pay tribute by making art that adds to the city’s ever-evolving mythos.

It’s been argued into a cliché that one is the product of their surroundings—and to say as much about Eric Drooker would be an acknowledgement that his artwork is as much about New York City as himself. Maybe more.

The images he depicts in such stark contrast—whether it’s the linocut, scratchboard, or stencil art, all of which he’s known for—all present the same city, seemingly, at war with itself, constantly and eternally.

Eric Drooker was probably one of the first political artists that I discovered. I was 13-ish when Rage Against the Machine put out their single, The Ghost of Tom Joad, and the artwork of that album is Eric Drooker – from the graphic novel, FLOOD!, to be precise.

After that single came out, I looked for more of his stuff. Something in the pictures had a real distinct emotion and humanity behind it–I would say everything in his work had soul. I bought a book of posters and other “street art” by him (this was the late 90’s, back in the days before “guerrilla art/marketing” was a household term, and work by Bank$y wasn’t being bought for $1 million by the world’s rich and famous). Eric Drooker’s art centered around the issues that the people of the city—the city itself—struggled with: police brutality, poverty, affordable housing and tenants’ rights, the freedom to assemble, etc.

In this story, Drooker depicts the epic story of a man struggling for a modest existence with only a handful of text. On most of his journey, he finds little more than bad options after he is laid off. From there, life in the city becomes a downward spiral; he seemingly bounces off of its edges as he falls, the rain pouring harder and harder in the streets. He wants work but can’t find anything that pays enough or is within his skill-set. He wants to feel comfort and love from another human being, but in the night only finds human beings more emotionally starved than himself.

The panel sequence that I find most powerful is when he finds his troubles compounding—bad news over and over and over again. The panels get smaller and smaller, the graphics more and more crude. It’s the perfect depiction of when a bad day just keeps piling up with unfortunate events, until you sit down and try to vent to a friend or in writing… and by then, so much garbage has piled up that it all feels petty.

FLOOD! sharpens the over-arching message that Drooker presents to us in all of his work depicting New York City:  It’s not just about one or another character and his or her stories–morality–or soul, as I mentioned earlier. Fundamentally, the “soul” in question appears to be the city itself. By the end of this story, you feel convinced of this idea that New York (and maybe all of our hometowns) have souls, and somewhere in the Heavens of the ether is a grand scale, precariously balancing all of the good (community, humanity, love, compassion, potlucks, free concerts in the park, dogs and cats, children playing in their neighborhood) with the bad (muggings, eviction notices, police violence, drug rings, gangs & crime syndicates, alienation, selfishness, and all that noise, noise, NOISE!). We wait in hoping that, should it ever be finally and resolutely judged, the number of good deeds will outweigh the bad.

… One can’t help but think about these things, especially when the streets of New York City really are a-flood. Even atheists and agnostics can’t avoid the mental exercise of imagining a natural disaster as an ethical and artistic expression of causality–from divine intervention, to karma, to some other simple form of poetic justice.